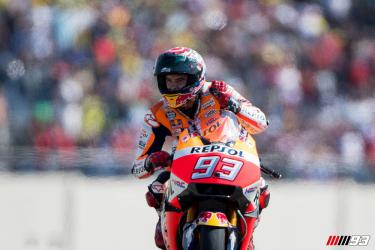 MARC MARQUEZ LAYS DOWN THE LAW AT ARAGON

Repsol Honda Team rider takes fourth win of the season, extends his advantage in the overall standings to 52 points and matches Mick Doohan for victories.

The fourteenth round of the MotoGP World Championship, held today at MotorLand Aragon, was the scene of the latest masterclass from Marc Marquez. The Repsol Honda Team rider fought back from a mistake on the opening laps to climb up from fifth place and take victory. With his fourth win of the season, the Spaniard now has a total of 54 in his career –equalling that of Mick Doohan– and extends his lead in the World Championship standings to 52 points over second-placed Valentino Rossi.

Within three weeks, the season heads into its final stretch with the Japanese GP. The race at Motegi will be Marquez’ first opportunity to clinch his third premier class title.

Marc Marquez: “I’m very happy to have taken the win at a home Grand Prix, and one of my favourite races. I was waiting for this GP, it was a ‘red point’ on the calendar for me, as I saw it as one where I wanted to attack and where I could win the race. It was an important victory, but nothing is finished yet. I said yesterday that something can always happen in a race, and it was a miracle that I didn’t crash today when I almost lost it in turn 7. That was when I decided to relax a little and go back to my mentality from practice of riding precisely and braking in the right places. All this made for a more entertaining race, with many overtaking moves at the start, and a second part in which I was able to open a gap to Valentino [Rossi], which was important.

He had gone several races gaining points on us, and we wanted to stop that trend, because otherwise it would boost his morale and perhaps create doubts for us. Now we leave Aragon with a larger advantage and more convinced ahead of the flyaways. I was very happy on the podium, but the most emotional moment for me today was when Alex scored his first Moto2 podium. That was really special for me”.