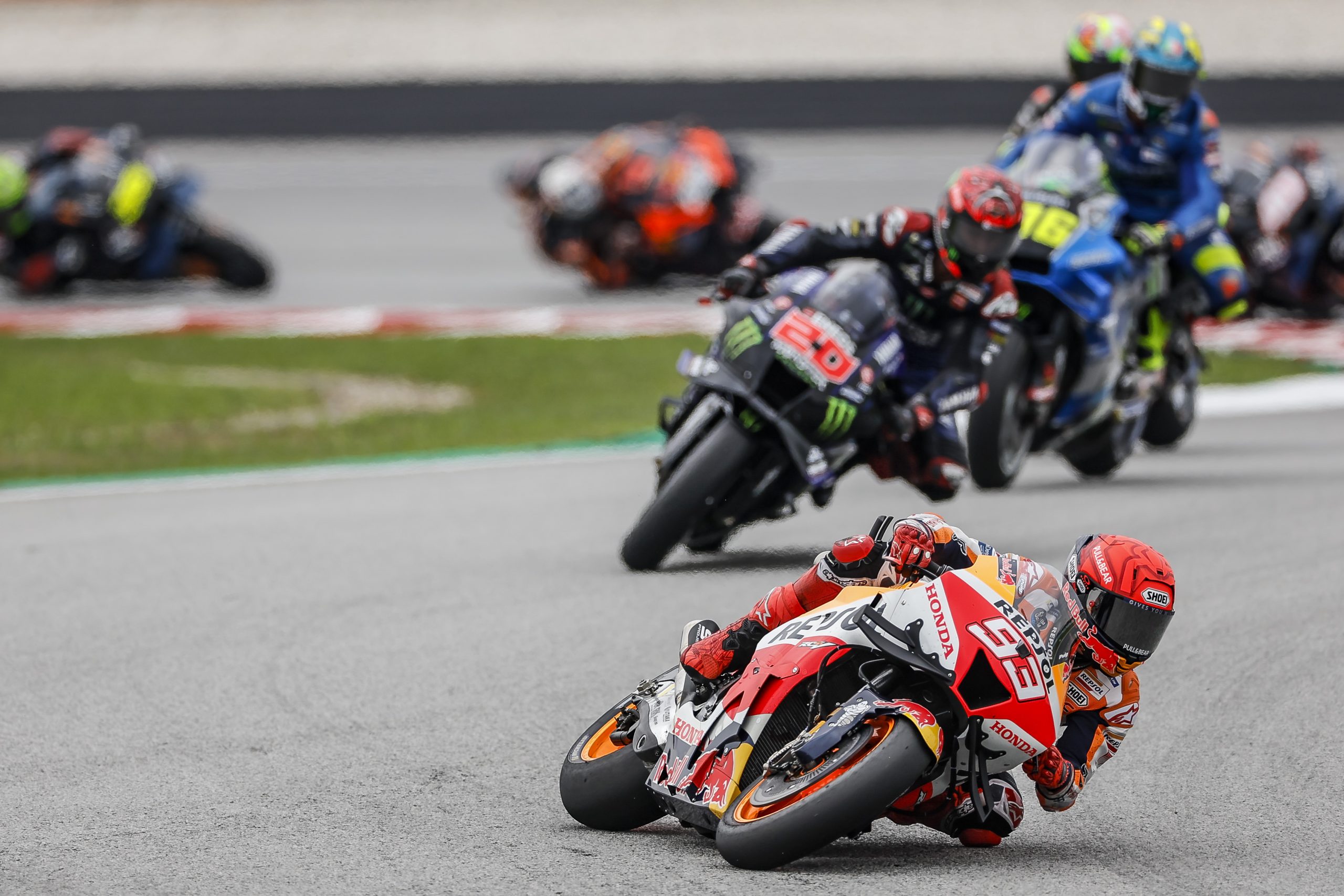 An energetic start to the Malaysian GP saw both Marc Marquez on a Sunday full of risk. Predicted thunderstorms did not arrive at the Sepang International Circuit and the 20-lap MotoGP race got underway as clouds filled the sky and the air hung heavy with humidity. From the front row of the grid, Marc Marquez made an impressive initial launch before losing positions into the tight and treacherous Turn 1. The #93 sat with the leading group for the opening laps and protected his position in the top five. By lap seven he became entangled in a brawl with both Suzuki riders and Bezzecchi, the eight-time World Champion holding the trio off as Miller approached. Their battle for fifth place would carry on until the end of the race with Marquez crossing the line in seventh place, his fourth straight top-ten finish since returning from injury. Race day was marked by the remembrance ceremony for Red Bull co-founder Dietrich Mateschitz who sadly passed away. Now just a single race awaits before the demanding 2022 MotoGP World Championship season comes to an end. Marc Márquez, 7th: “As I said yesterday, what we did in Qualifying was above and beyond and this is more or less what I was expecting from our race. We gave our 100% all race to achieve the best possible result, we started really well but I saw I didn’t have the speed to stay with the leaders. I tried to find my place and avoid taking any unneeded risks and get some good information from the race. I did everything that Honda asked me so I am optimistic they will use this information to improve in the future. Now we can start to prepare for Valencia after a difficult weekend, because here we could see the level of our bike. I think we can be closer in Valencia.” Back to news 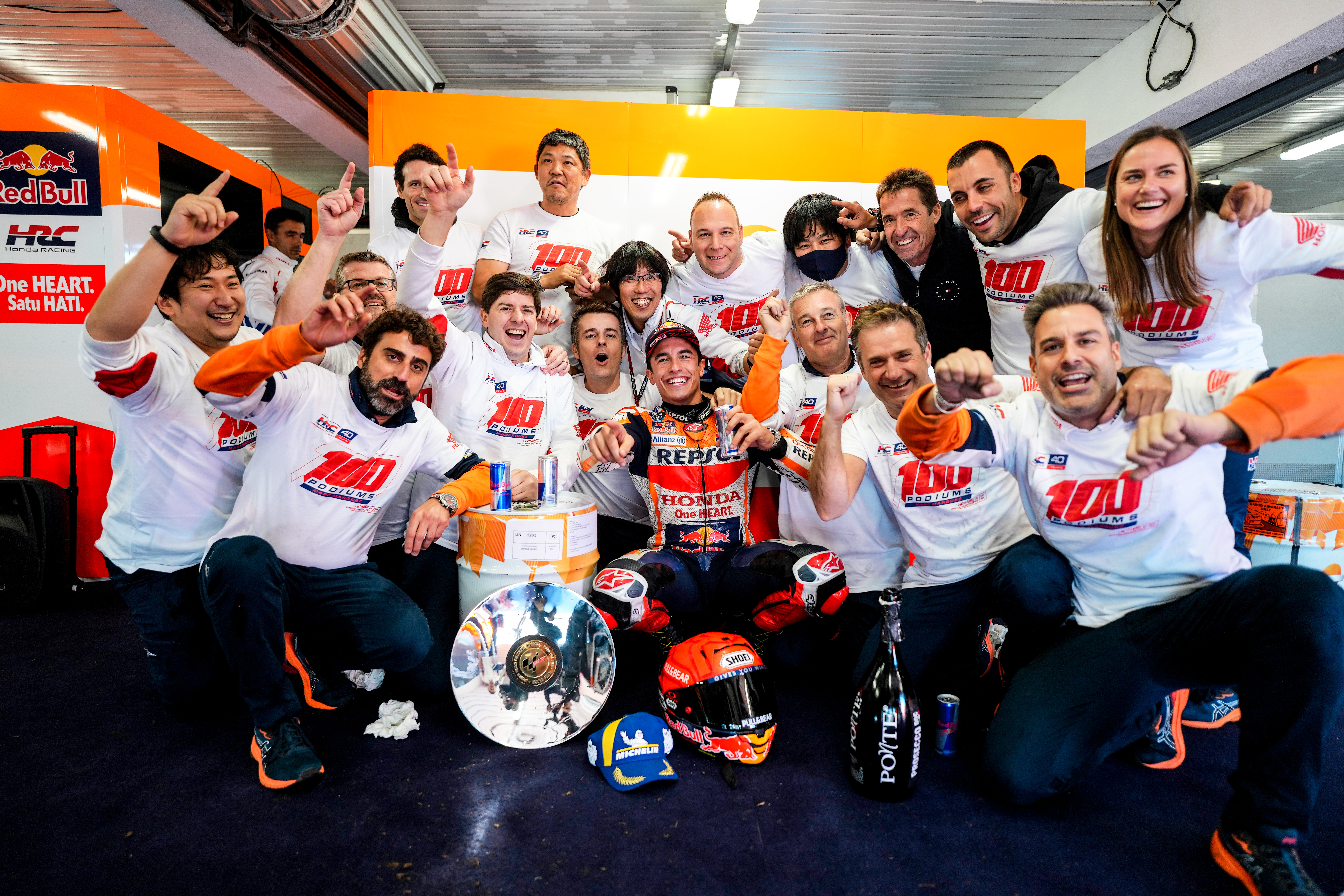 Marquez makes it 100 with podium return

357 days after his last trip to the podium, Marc Marquez became just the fourth rider in history to achieve 100 premier class podiums after a thrilling Phillip Island battle.

The sun was shining down on the Phillip Island Circuit as Marc Marquez lined up in the centre of the front row of the grid for the 27 lap race. With clear track ahead of him, the #93 charged off the line to tuck in just behind polesitter Jorge Martin for the opening half of the race as they avoided the frantic battle behind. As the laps went by, the competition grew closer and it was soon a seven-way battle for the victory – a true Phillip Island classic. It would only be decided in the closing laps, Marquez saving his soft rear for an all-out assault at the end.

Pushing until the line, for the 31st time in his MotoGP career the eight-time World Champion took second place and earned his 100th premier class podium in the process. Marc Marquez narrowly missed out on a return to the top step of the podium 0.186s behind Rins. 357 days after his last podium, achieved at the Emilia Romagna Grand Prix in 2021, Marquez has once again taken to the rostrum. After incredible efforts to return to fitness after a fourth surgery on his injured right arm, the podium shows the great progress that Marquez is making in his ongoing recovery.

The eight-timme World Champion becomes just the fourth rider to achieve 100 podium finishes in the premier class, joining Valentino Rossi, Jorge Lorenzo and Dani Pedrosa in an exclusive club. From 152 MotoGP starts, Marquez has achieved 59 wins and has finished in the top three in 65% of his premier class races. The second-place finish also moves him level with Spanish legend Angel Nieto, the pair sharing 139 podiums across all Grand Prix classes.

Now the Repsol Honda Team head for the penultimate race of the year at the Sepang International Circuit in Malaysia. From the cold and wind of Phillip Island, it looks set to be a classic weekend in Malaysia with scorching temperatures and high humidity. The work continues right until the end.

Marc Márquez, 2º: “It was a great race today; I really enjoyed the battle a lot and the feeling of returning to the podium is fantastic. It has been a long journey and we have reached the next stage. The soft rear was certainly the correct option for us in the race, I felt quite good, and I was able to fight until the end. At the start I was managing the situation a little bit, but I really enjoyed the race, I tried to win! Alex Rins did really well in the last few laps. I left everything out on track today and I really enjoyed all the overtakes, especially at Turn 2 because the bike was working really well there. We are coming better but there is still work to do. It’s great to achieve this milestone of 100 premier class podiums and an honour to draw equal with Nieto but we are not done yet!” 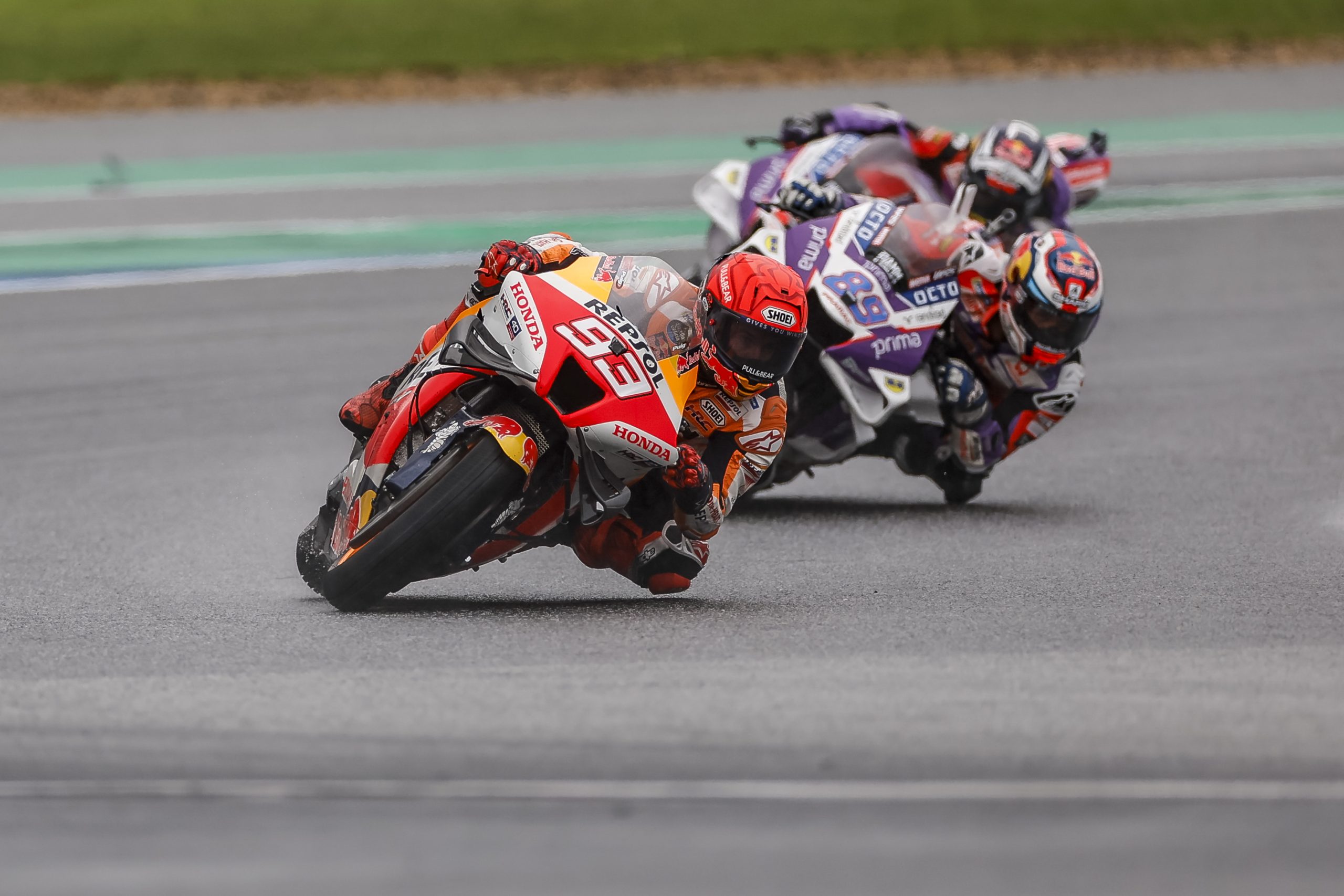 A dramatic day at the Thai GP yielded more points for the Repsol Honda Team as Marc Marquez.

What had looked set to be a straightforward race day in Thailand was interrupted by a torrential downpour during the Moto2 race, leaving the Chang International Circuit soaking wet. Subsequent on and off showers saw the premier class race delayed by almost a full hour as race organizers waited for a clear window of weather.

All eyes were on Marc Marquez when the racing did get underway as he shot off the line, disappearing behind a wall of spray as the field charged into Turn 1. Emerging from the wall of water, Marquez found himself firmly inside the top five and settled in for the long 25-lap race. Steady at the start, the eight-time World Champion picked up the pace as the race went on as he used his incredible riding ability and mixed-weather skills to guide his Honda RC213V around the Thai circuit. In the closing laps, Marquez smelled a potential podium and launched his attack on Francesco Bagnaia but was unable to make a move stick.

Ultimately settling for a fighting fifth place, Marquez moves up two positions in the overall MotoGP World Championship to 13th.

The MotoGP World Championship now enjoy a one-week break before the Australian Grand Prix and the final three races of the year begin.

Marc Márquez, 5º: “I am happy with the race overall; I was again able to do a solid race – avoiding mistakes and staying calm at the start. Wet races are always very long so you need to be careful. Then I was feeling better, and I gained time on the group ahead, but it was impossible to overtake Bagnaia. The acceleration of the Ducati is very strong. We keep on working and trying to improve everything, it has been a good weekend where we were competitive in the wet and the dry. Now we have a week off to recover a bit and keep on training to be strong for the final three races of the year.”