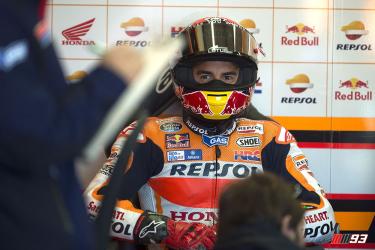 Reigning World Champion, Marc Marquez, crashed out of today’s British Grand Prix at Silverstone whilst fighting for the lead in the rain in an accident-filled race, with teammate Dani Pedrosa managing to bring the bike home and finish fifth.

After a delayed start caused by the onset of rain, Marc broke away at the front with Valentino Rossi after an initial flurry of overtaking. Over 6 seconds ahead of the third placed rider by Lap 13, the Repsol Honda rider crashed at Turn 1 and was unable to continue the race. Dani, who suffered early in the race, dropped as low as seventh but made the most of several crashes ahead of him to take fifth.

With this result, Marc lies third in the overall standings with 159 points and Dani, seventh with 102. The MotoGP World Championship now heads to San Marino, to begin the last quarter of the 2015 season in a fortnight’s time. 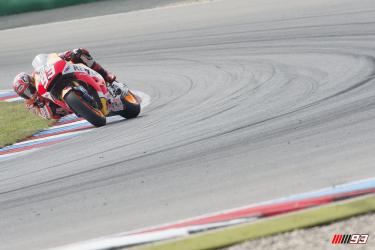 SECOND PLACE FOR MARC IN BRNO

Starting from second on the grid, Marc held his position behind pole man Jorge Lorenzo from the beginning. Dani – who’s qualifying was affected by his injured left ankle – started from 9th but after being pushed around by Hernandez in the first corner he found himself in 12th. He climbed back up to 10th by the end of the first lap, and then by lap four he was already in 8th as Jorge and Marc set an incredible pace and a gap of over two seconds, with Marc setting the race’s fastest lap (1’56.048).

On lap seven Dani caught and passed Smith and was now in sixth, chasing down Dovizioso and Iannone ahead of him, meanwhile Jorge started to push and open up a small gap over him and Marc, which he controlled to the end. By lap sixteen, Dani was on the back of Dovizioso and pushing hard to overtake. He managed to pass briefly on the penultimate lap before being passed back, and then on the final lap Dani made his move stick and crossed the line to take 5th by just 0.075 seconds.

Marc remains third in the Championship Standings on 159 (52 points behind Lorenzo and Rossi on 211) and Dani is seventh on 91 points. 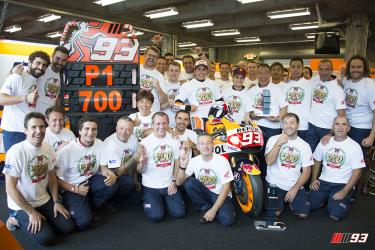 Marc and Dani both lost a position on the opening lap, dropping down to 2nd and 3rd respectively as the race began under a constant threat of a thunderstorm. Together with Jorge and Valentino, they began to open up a gap over the rest of the field and on lap eighteen Valentino passed Dani into 3rd.

The riders split into two groups with Jorge and Marc opening up a gap and with eight laps remaining rain flags were displayed at points around the circuit. Fortunately the storm held off and the riders pushed on, tracing each other lap after lap. Dani passed Valentino on lap twenty three but was passed back within a few corners.

Meanwhile, Marc set a new lap record (1’32.625 lap twenty four, beating his 2014 time of 1’32.831) as he chased down Jorge, passing him in turn one on lap twenty five. He was able to fend off a challenging Jorge and clinched his 7th win in America in the MotoGP class, and crowning Honda’s 700th victory in World Grands Prix. Dani and Valentino continued to trade places on the final lap but despite a valiant effort, Dani was unable to take the final podium place.

Honda riders have won all the MotoGP races in Indianapolis for the past six years and now celebrate eleven consecutive wins on American soil (since Indianapolis 2010). Marc has now moved into 3rd in the Championship Standings, 56 points behind Valentino. Dani remains in 7th place on 80 points after ten rounds of the 2015 season.