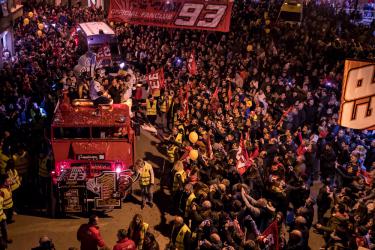 Marc Márquez received a great reception in home town to celebrate his fifth World Championship -his third in the premier class.

In what has become something of a tradition, Marc Marquez was greeted by fans in his home town of Cervera this Saturday, in celebration of his latest success: His fifth title in the Motorcycle World Championship. After starting the day with an institutional event at the Town Hall, the Repsol Honda rider enjoyed a parade of Cervera, accompanied by his team. On the trailer of a fire engine, they travelled along the main streets of the town until reaching a stage, from which Marquez addressed all of the gathered fans. The MotoGP World Champion kept the party atmosphere going, whilst at the same time thanking his team, the authorities and especially the fans for all the support he received this past season.

Marc Marquez: “I am very grateful to all the people who have come here today, once again, to celebrate in this great party. Before going to the Valencian Grand Prix, when I was cycling, I had already seen all the streets decked out with flags with my name on, and I began to feel butterflies in my stomach. I am very grateful, because these fans are not only there for me in the good times, they are also there in the bad times. It is an honour to receive these shows of affection and to be able to celebrate with all of the people here.” 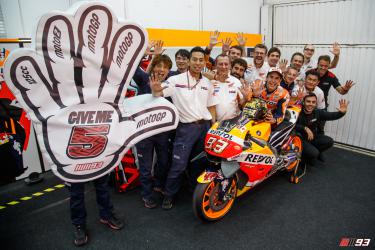 2016 MotoGP World Champion places second at Valencia in his 150th Grand Prix, after a great comeback from sixth position.

The Valencia Grand Prix brought the curtain down on the MotoGP World Championship for another year, and Marc Marquez ended the 2016 season by taking second place on Sunday. The Repsol Honda rider did not make a good start and had to climb back up from the sixth position he had dropped to on the opening lap, but managed to place on the rostrum on his 150th Grand Prix appearance thanks to his pace and determination. With 10 laps remaining he was second, 5 seconds behind Jorge Lorenzo, and he further reduced the gap to just a single second before the chequered flag.

Marc Marquez: “We’re happy because we’ve managed to get on the podium and we’ve finished the season strongly. This is the most important thing. In the race, the start penalized us a lot as I had an issue with the clutch and lost several positions. Afterward I wasted a lot of time behind Rossi and Iannone. As Valentino said yesterday, overtaking is difficult on this track, so even if I was able to get close, to pass them was another story because I was losing under acceleration and was a bit on the limit under braking. I waited behind as the tyres began to affect performance, and step-by-step I continued improving until I found the opportunity to pass them. From then on I was able to improve my speed, and maybe if the race had lasted a little longer I might have reached Lorenzo. Anyway, he had an incredible race and I was not able to catch him. Congrats to him for this result”.

“It hasn’t been an easy season but we were able to win the title in Japan and secure the Constructors Championship this weekend, which is great. Now we’ll work hard starting from the next test to try and improve our bike even more”. 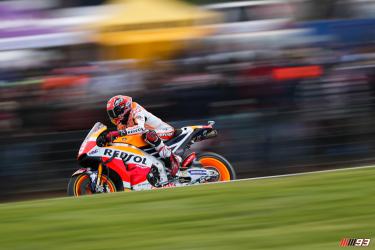 Marc Marquez will celebrate his 150th Grand Prix this weekend in Valencia. He has triumphed on twice at Valencia (2014 in MotoGP and 2012 in Moto2) and has claimed four podiums at the track.

The 2016 MotoGP World Championship reaches its finale this Sunday at the Circuito Ricardo Tormo, and Marc Márquez will be back at full strength for the last round of the year. The race will be the 150th Grand Prix for Marc Marquez, and his first race in front of his home fans since winning the title in Japan.

Marc Marquez: “It has been good coming back home after the three flyaway races with the title already won, and to celebrate it with all my family and friends. I had the chance to chill out a bit and get back to my usual training, both indoors in the gym and outdoors with some motocross and cycling. ‘Thanks’ to the jetlag, I had the opportunity to enjoy some really spectacular dawns on my bicycle! Anyway, the season isn’t over yet, as we’ll race in Valencia on Sunday, and after that we’ll have two important days of testing. Our target for the race is of course to try and finish on a high in front of our fans, possibly with a win or at least a podium. It is good to see that Dani is getting better and to know he’ll be back in Valencia.“