Marc Márquez: ALL IN

Check out the first sneak peek of the eight-time World Champion, as you’ve never seen him before What does it take to get back to the top? A new five-part documentary, Marc Marquez: ALL IN, will give viewers worldwide a chance to find out. It’s been three seasons of injury struggles, surgery, and recovery for the eight-time World Champion, and now more than 200 countries around the world will be able to go behind the curtain like never before as Marc Marquez: ALL IN lands on Prime Video in February 2023. The documentary, produced by Fast Brothers in collaboration with Red Bull Media House, TBS, and Dorna, joins the journey as Marquez moves to Madrid to continue his recovery and returns to MotoGP™ for 2022. However, despite the Herculean effort already made by the eight-time World Champion, problems with his injured arm continue to plague him – leaving him facing another choice: more surgery and another long recovery process. And that with no guarantee of returning to the MM93, who broke records and changed the DNA of the sport. But Marquez? He was all in. Fans around the world will now be able to see exactly what it takes to win eight World Championships and still have the hunger for more as Marc Marquez: ALL IN provide a unique look at one of the greatest ever as he commits to a return not just to compete, but to winning. Watch the teaser below and get ready to witness a champion already crowned and looking to return for his throne. Can he do it? The first answer to that question will be revealed on the 26th of March 2023 at the Autodromo Internacional do Algarve as the number 93 takes on the season opener, looking to remind the grid, the world, and himself exactly why he went all in the first place. Back to news 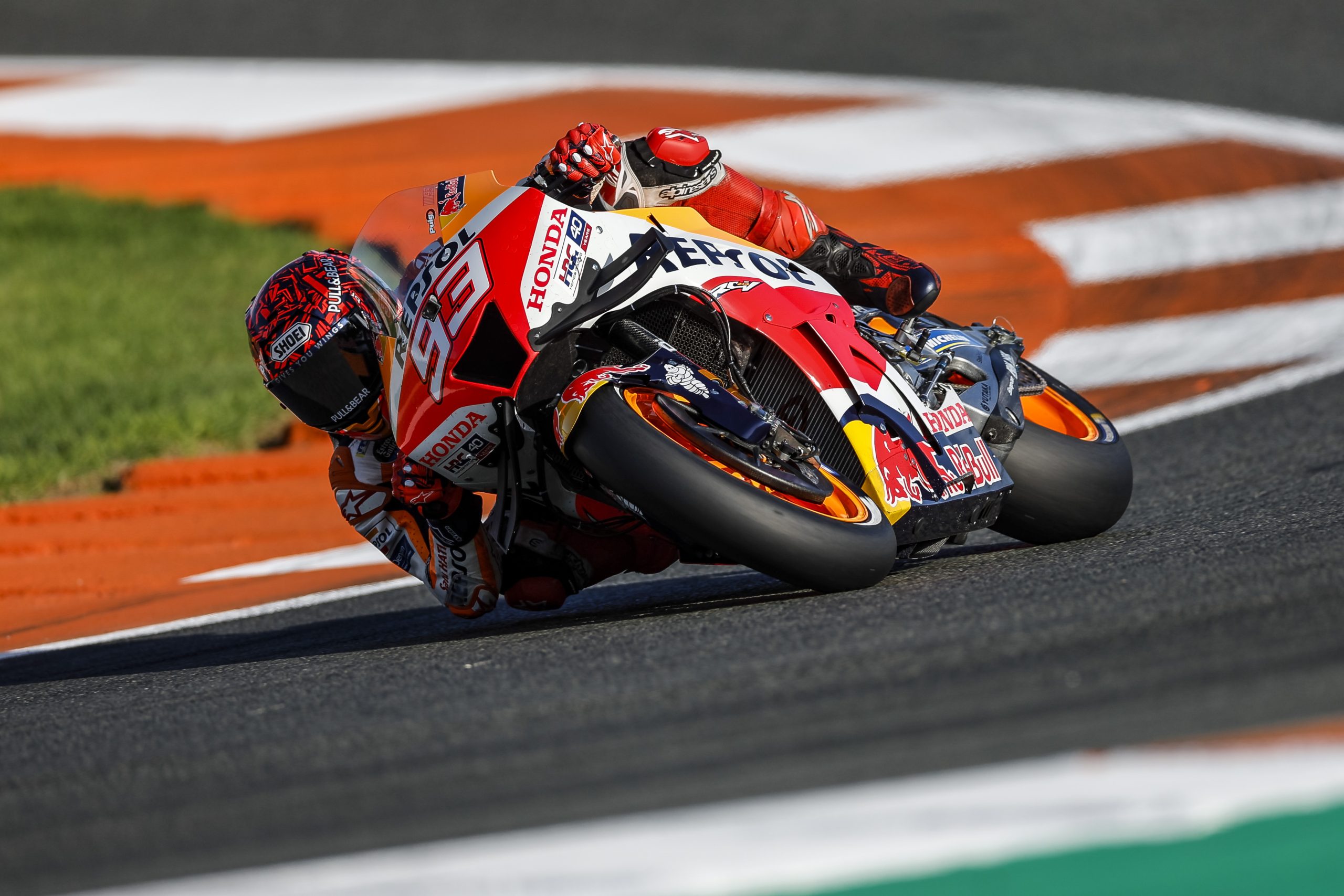 Marc Marquez and the Repsol Honda Team got their 2023 preparations underway in earnest with the traditional post-season Valencia test.

Completing 50 laps, Marc Marquez split his time across a number of RC213V machines to determine the direction HRC’s engineers need to follow over the winter. Assessing a number of parts and components for the RC213V, flying laps were not the main focus as the #93 ended the day with the 13th quickest time, a 1’30.676. Marquez was pleased with the first steps made by HRC engineers and is eager to see what will come in February.

Now a busy winter begins for the engineers back at HRC headquarters in Japan and for the riders at home training and in the gym as every works to be as prepared as possible for the next season. MotoGP action will resume in 2023 with the Sepang Test, February 10 – 12 where the newest and latest machines, parts and upgrades will appear for their assault on the 2023 crown.

“It was an important day today. I tried everything I had to try today and we were really focused to finish what we needed to do for Honda, there was no need to put a new tyre and go for a time attack. I was hoping for a little more but we gathered a lot of information and were able to share a lot of feedback with all the engineers inside the garage. It’s good to see that Honda is working and has been able to bring some more parts here and I am already looking forward to seeing what they bring to Malaysia. Now we will enjoy a very short holiday before we begin preparing for 2023 because I need to stay focused and consistent to be as fit and ready as possible.” 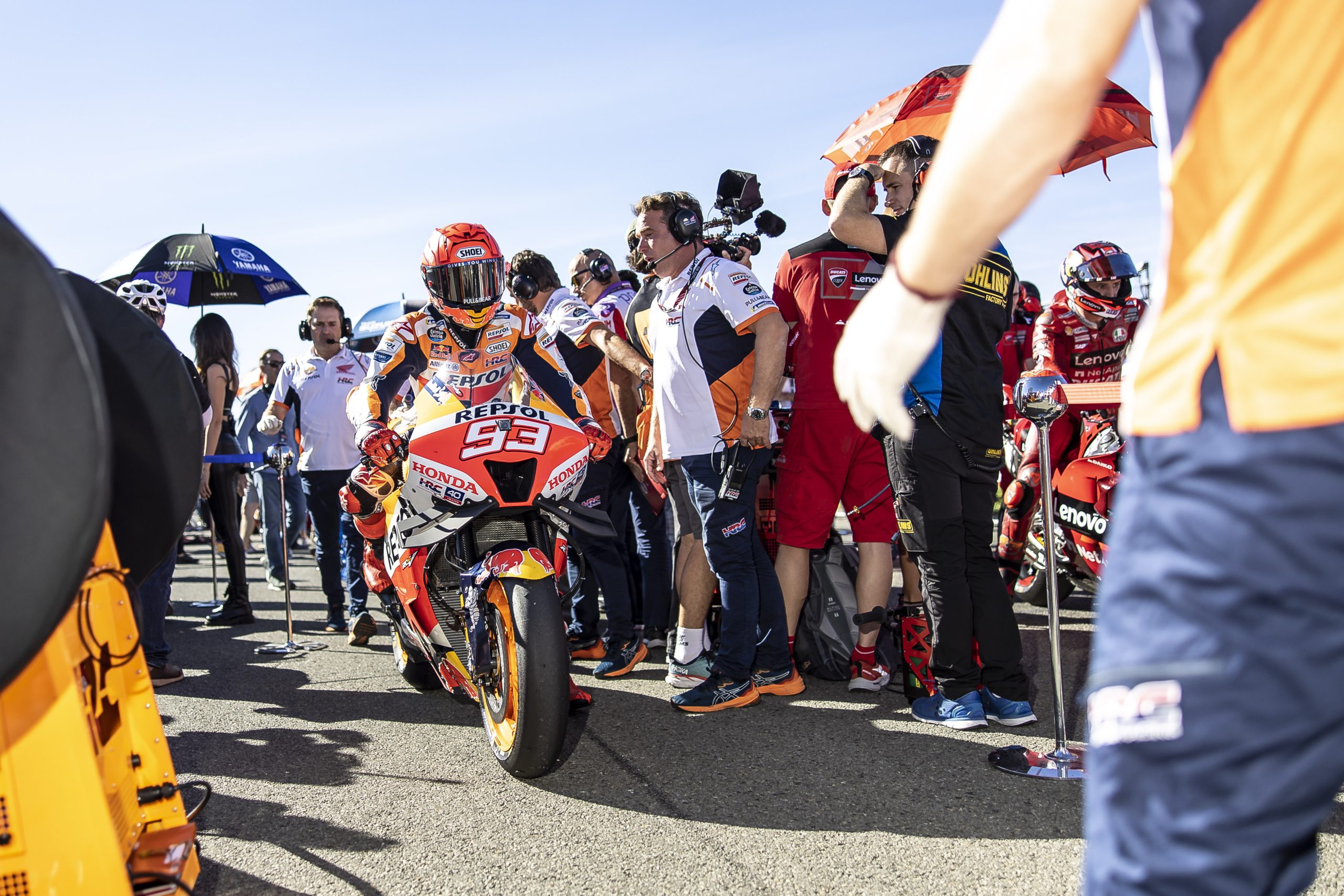 2022 season ends in disappointment for the Repsol Honda Team

A promising weekend in Valencia saw the Repsol Honda Team walk away unrewarded as both riders fell. Marc Marquez had made a promising start to the race, holding firm inside the leading group and preparing for the final laps. But a fall at Turn 8 a couple of laps later would end the #93’s hopes of finishing the season on a high. Focusing on the positives of the weekend, Marquez demonstrated that he has the speed, rhythm and feeling to be consistently at the front.

The longest season in MotoGP history comes to an end, 20 races spanning the globe and over 150 sessions. It has been another complicated year for HRC and the Repsol Honda Team with just two podium finishes. As one chapter closes another begins and preparations for the 2023 campaign are already underway. Action continues on Tuesday with the post-season Valencia Test.

Marc Márquez, DNF: “Overall, looking at the big picture, I am happy with the weekend because we showed that the level is there, the rhythm is there, the feeling is there. I understand how I need to be fast and I was happy, but today wasn’t the day. Yesterday I said the target was the podium but from the start I didn’t feel right. I saw that the podium was leaving so I went all or nothing. The speed was there and we know what the issue was today in the race. I am going to work hard this winter to be as prepared and as ready as possible but work begins even sooner on Tuesday. I am looking forward to trying Honda’s first step of 2023.”