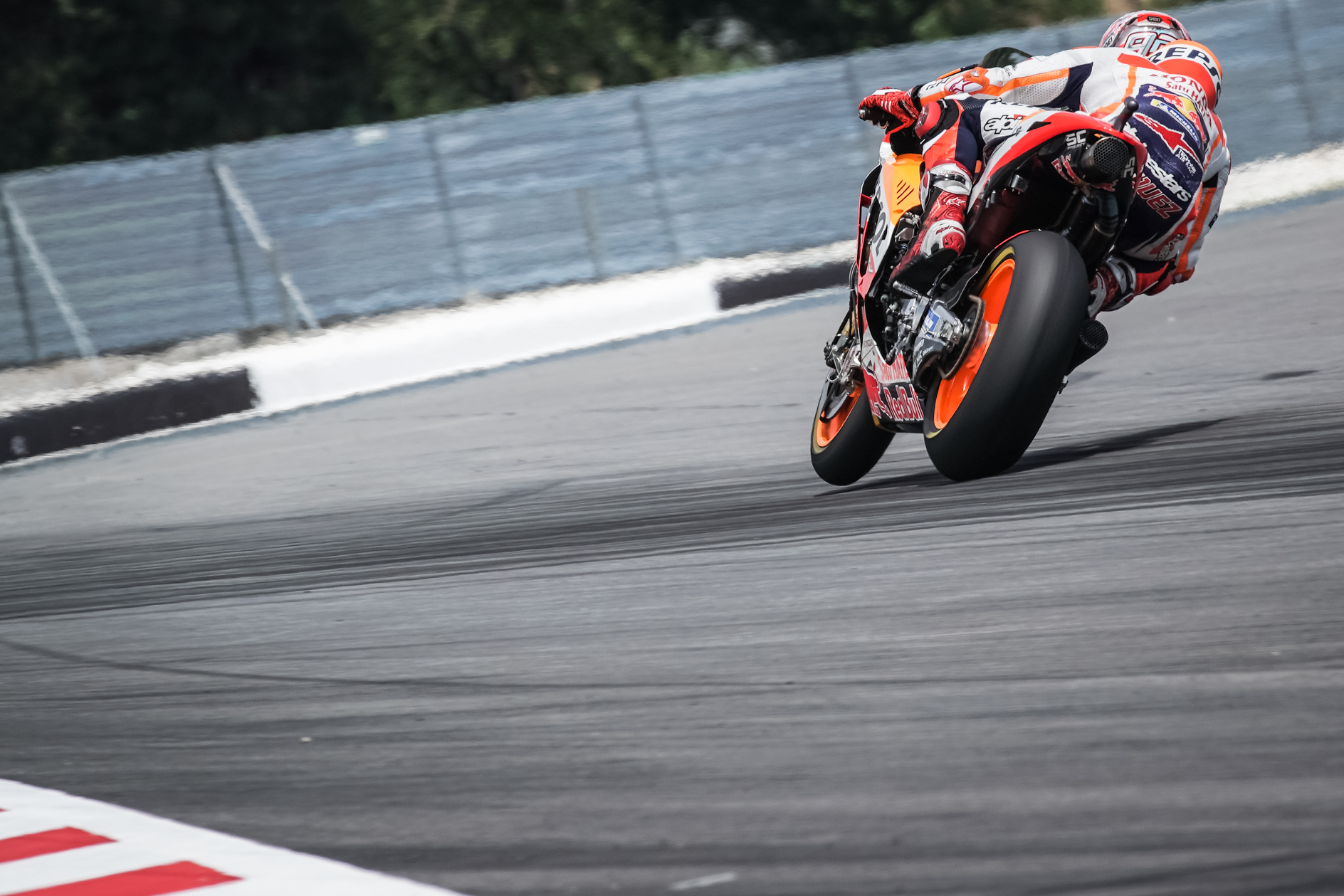 Márquez returns to the ‘Cathedral’ of motorcycle racing

After the last Grand Prix, Marc Márquez completed an official test at the Circuit de Barcelona-Catalunya, in which he finished first.

Marc Márquez:
“We’re coming off a good day of testing in Catalunya but Assen is a much different track compared to Montmeló, so it will be very interesting to see how we go there. So far we’ve been at a good level more or less everywhere and we’ve managed to get some good results at different circuits, so we’re also feeling positive going to Assen. I like the track, the ‘Cathedral’ of bike racing, and the fans are always very passionate there. It’s good to arrive with a little advantage in the Championship, but we’re very early in the season. There are several riders for whom the title is still possible, so we must just keep working and try to get the best result the situation allows.” 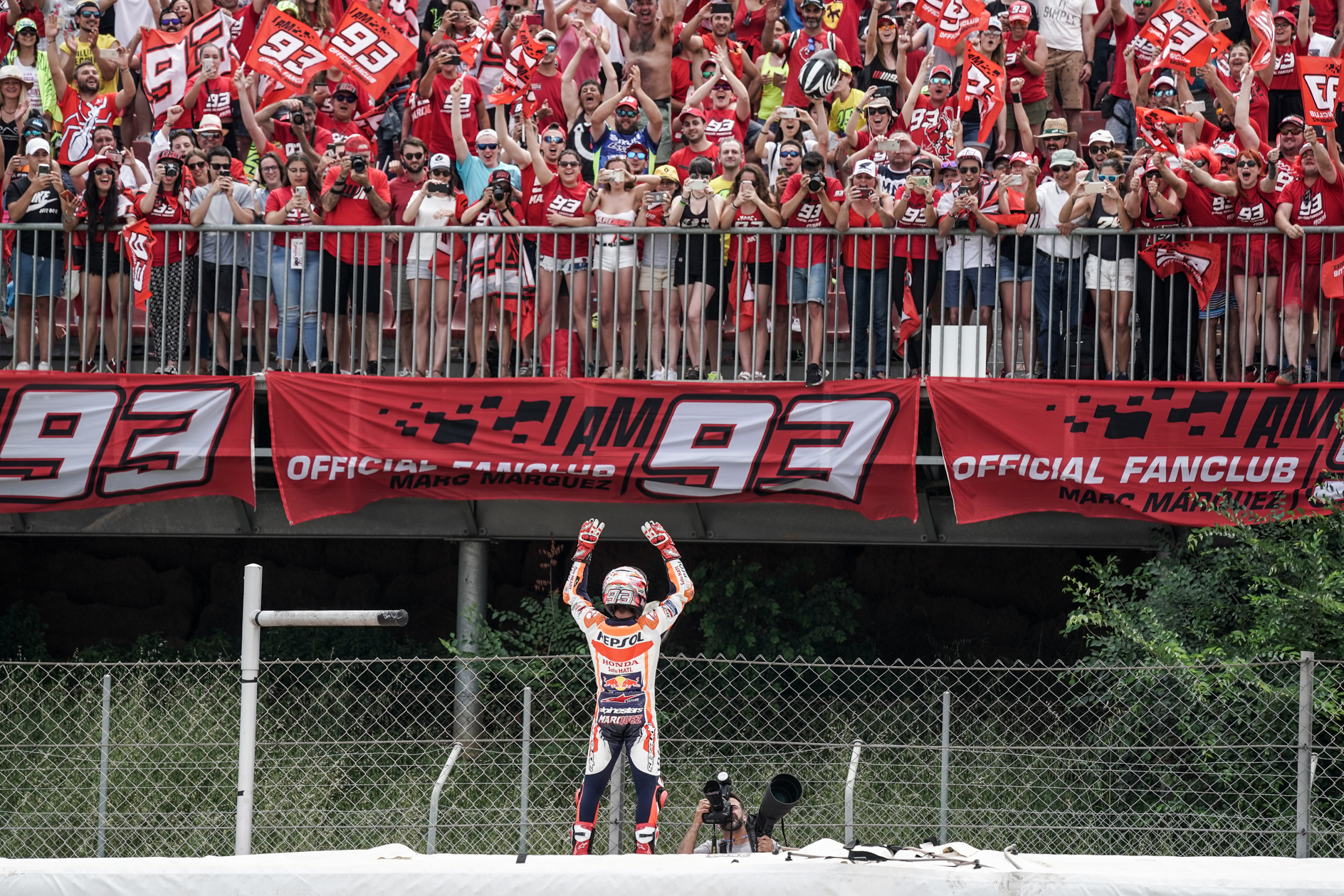 Marc Márquez gets back on the podium in Montmeló

At the start Márquez took the lead immediately, on Lap 2 Jorge Lorenzo overtook Márquez and the positions did not change from then on.

With his latest rostrum result, Márquez has 115 points in the overall standings, 27 more than his nearest rival, and Pedrosa is eleventh with 40 points.

Marc Márquez:
“Today was a race where we had to manage as best as possible and I tried to be smart. Of course in the first laps I pushed hard because it was important to follow Jorge and to open a gap on the chasers. When we built a comfortable advantage I just managed the pace. I even slowed down a bit in the final part of the race as it was impossible to catch Lorenzo. I saw many crashes, which made me think more than I did in other races. Sometimes the tyre choice you make doesn’t result in the exact feeling you were hoping for, but I think that second is very good for the Championship because we arrived here with a 23-point lead and go to Assen with 27. It’s time to understand how the situation is and try and manage it as best as possible. We made a mistake in Mugello and that had me thinking a lot. Of course, when you don’t win the feeling that you were missing something remains, but a podium is a good result! Maybe other challenging races will arrive but the good thing for us is that so far in every race we have been in good shape.” 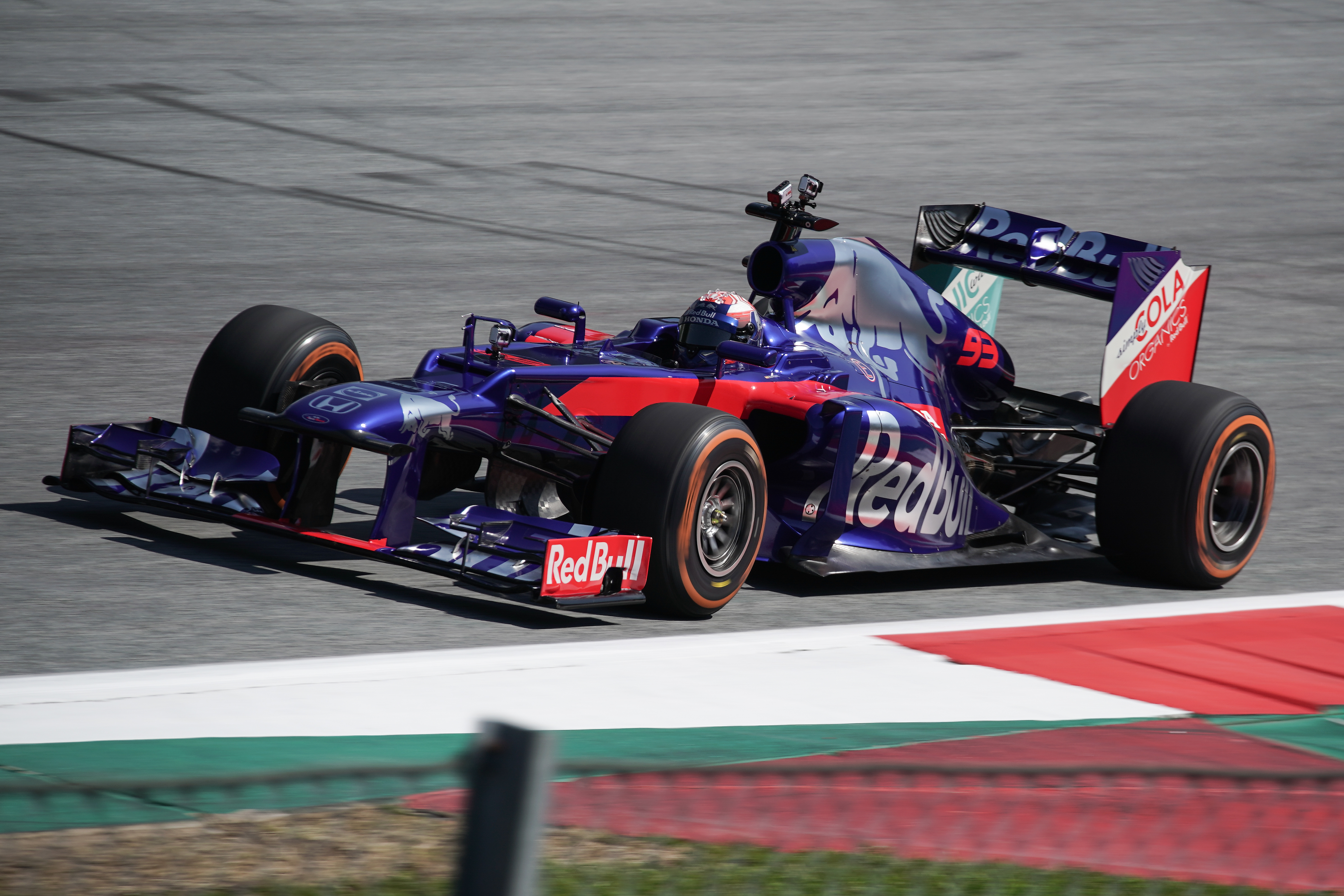 Four-time MotoGP champion and world championship leader Marc Márquez was racing around with a Formula 1 car for the day and thereby fulfilling a long-held dream. Under the guidance
of former Formula 1 driver Mark Webber, the Spaniard sped over the asphalt in a Toro Rosso. Hundreds of fans lined the opened stands to watch the superstar’s Formula 1 adventure in the flesh. There was huge international media interest in the event. Dozens of journalists and photographers from right across Europe came to Spielberg to be there as Marc Márquez, Mark Webber, Dr. Helmut Marko and Niki Lauda talked about their passion for motorsport.

Two days after competing in the world championship in Mugello, the Spaniard switched from two wheels to four. After a few warm-up laps, the Toro Rosso went straight into top gear. The top motorcyclist showed in impressive style that motorsport is in his blood. Having been perfectly prepared for the event by experienced F1 driver Mark Webber, the four-time MotoGP champion notched up lap after lap at the Red Bull Ring in a super-fast F1 car and loved every minute of it!

The Formula 1 adventure of Marc Márquez was a highlight for Austrian fans. Numerous motorsport enthusiasts came to Spielberg on Tuesday to enter for free and support the current MotoGP leader up close at the racing circuit. He took a short time to sign autographs and pose for photos in return.

Marc Márquez:
“There is a massive difference to MotoGP. The limited visibility was a great challenge, in particular, to begin with. You feel a lot more constricted in the cockpit. The braking distances and timing in turns is completely different. A Formula 1 car has much more downforce, of course, which made for a lot of fun in the part of the circuit with the most turns, in particular.” 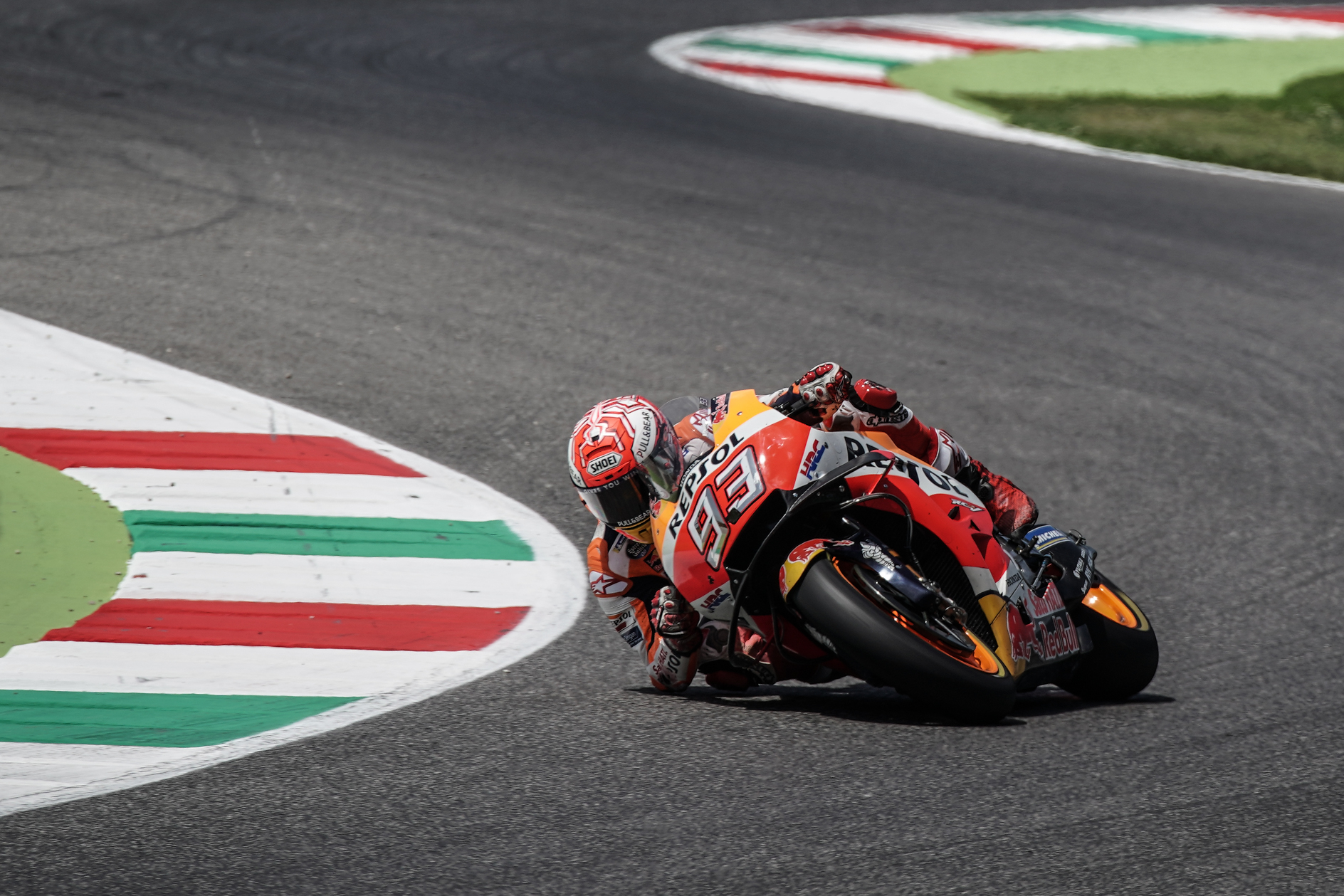 Marc Márquez was second coming into the first corner, although he went wide and dropped two positions. He was third before the end of the opening lap was back into second –behind Jorge Lorenzo- on Lap 3.

On the fifth lap, the reigning MotoGP World Champion lost the front of his bike and crashed. He got back on track in eighteenth position and crossed the finish line sixteenth.

Marc Márquez:
“We’ve been struggling the whole weekend to be perfectly comfortable with these particular spec tyres, but I wasn’t suffering that much in the race today. Instead, the front folded quite unexpectedly, as I wasn’t pushing that hard, and I crashed, though I almost saved it! When I re-joined the race, our pace wasn’t bad at all, despite the bike being a bit damaged, so that’s okay. Furthermore, we still have a 23-point advantage in the rankings, and this is also very positive; last year at this point we were 37 points back. Today also demonstrates what I’ve been saying for a while: things this year are pretty tight, the season is long, and anything can happen. That said, we’ll keep working as usual at Montmelò, where we’ll go back to the usual tyre spec, and we’ll try and come back strong.“ 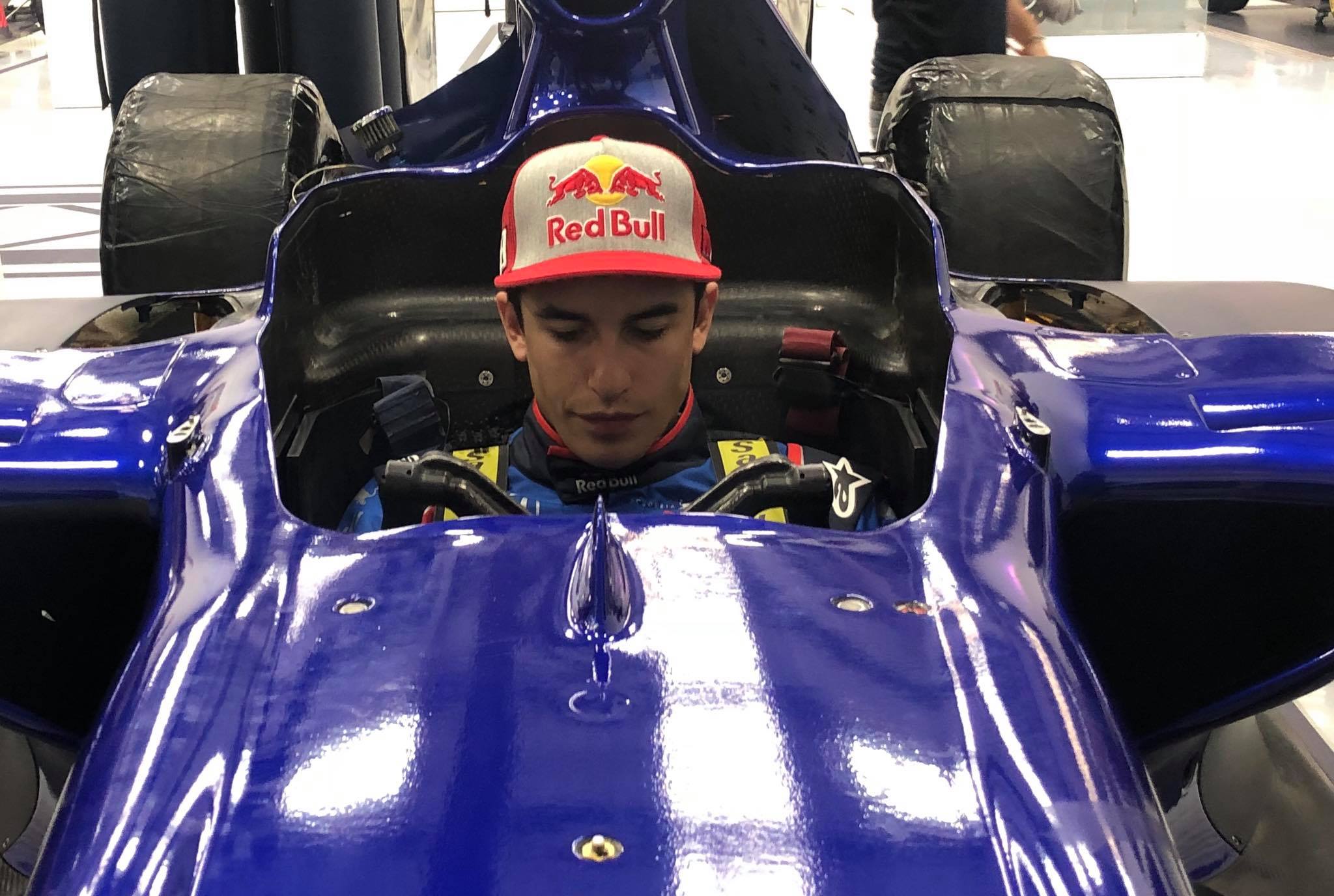 MARC MÁRQUEZ TO GO TO THE LIMIT IN AN F1 CAR

Four-time MotoGP World Champion Marc Márquez after the next race at Mugello, the motorcyclist will be coming to Austria to hurtle around a race track in a Formula 1 car for the first time in his life. When the Spaniard pushes a Toro Rosso to his limits on 5 June at the Red Bull Ring, all kind of motor racing enthusiasts will be there. Fans can experience this extraordinary event in motor sport up close with all opened stands offering free admission.

Visitors and riders alike appreciate that fantastic interest, with Marc Márquez leading the way by saying: “You can see that MotoGP is being given a fantastic welcome to Austria. We feel really happy here, and that is the most important thing!”