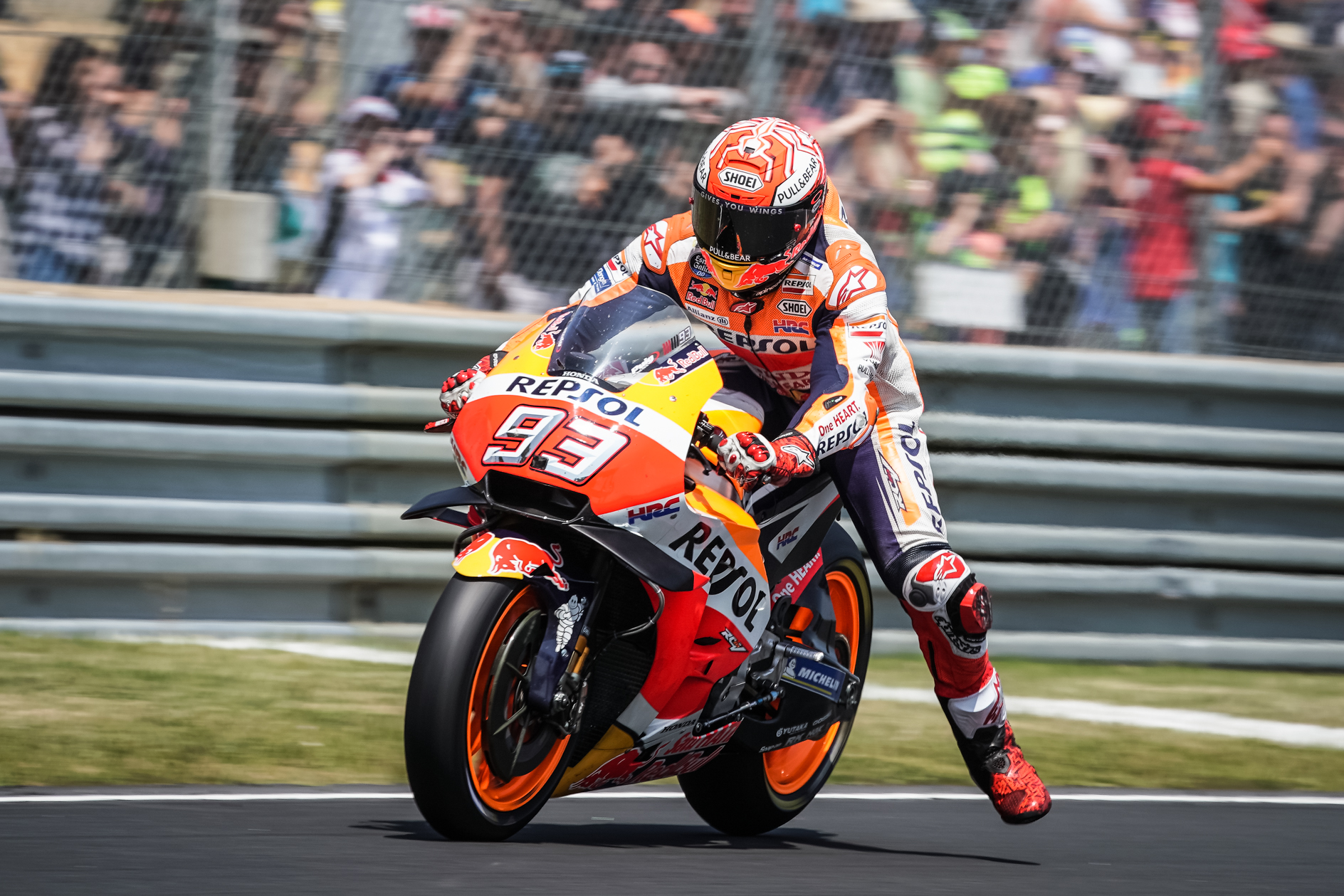 The reigning World Champion has won three times on his previous visits to the Mugello circuit: The first of his Grand Prix career in 2010 – in 125cc-, a Moto2 win in 2011, and the most recent in 2014, in MotoGP.

Mugello is characterised by being one of the most beautiful, fast and demanding circuits on the calendar.

Marc Márquez:
“It’s good to go to Mugello with an advantage in the Championship, but we’re still in the early phase of the season and everything is very tight, so we must keep our feet well on the ground. We had a test at Mugello before the French GP and were able to be fast and very consistent. That’s good of course, but you always have to wait and see what situation you’re in when you start working for the race. There are always question marks regarding tyres, setup, temperatures, and so on. For instance, conditions will probably be warmer this weekend compared to when we tested, so we’ll just keep concentrating to try and manage well the usual ups and downs of preparing for a race.“ 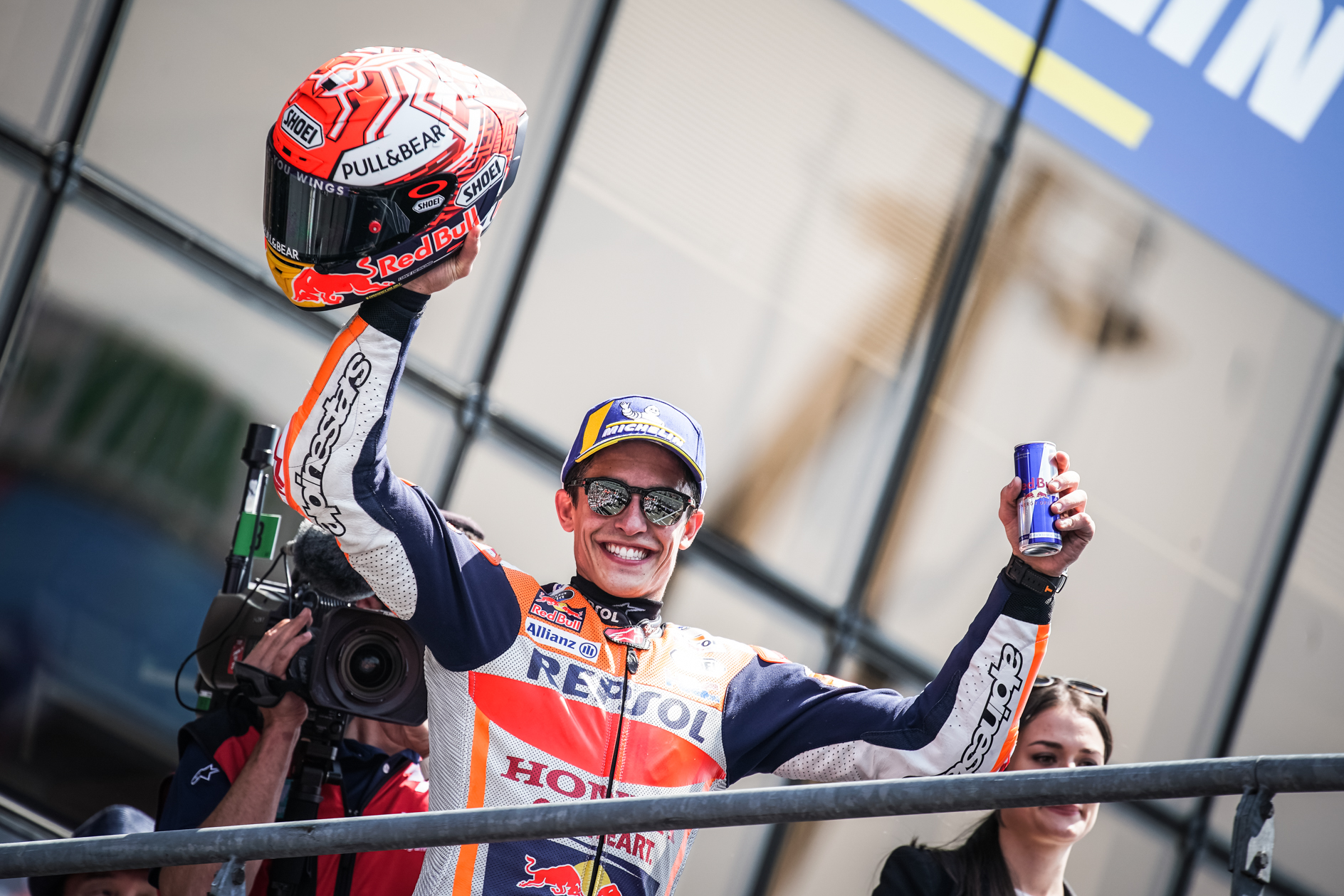 The Repsol Honda rider regained ground steadily, taking the lead on the tenth lap and holding it until the chequered flag.

This result allows him to  move level with Casey Stoner as the rider with the fifth most victories in the premier class: 38.

Marc Márquez:
“I’m particularly happy with this win here in Le Mans, as it’s one of the most difficult tracks for us! Today I was the only one on a hard rear tyre, and that made my approach to the race a bit different because I knew it would take a little more time to reach the right temperature. But during the warm-up, I had the opportunity to verify that once the tyre was ready, it was very constant, and I was able to keep a very good rhythm. To be honest, things were a bit challenging at the beginning of the race: Zarco touched me in the second corner and I went a bit wide, then Iannone crashed and nearly hit me, so I lost some more positions. I decided to cool down for a while. When I saw that Dovi and Johann were out, my approach to the race again changed a bit. At a certain point, I had one big moment in turn three, where I had already crashed in FP3, which is why I was being extremely careful there; I think that helped me to avoid a crash in that moment. I’m currently experiencing a very ‘sweet’ period with my bike, and when you’ve got that kind of feeling, you also work better; then you ride better, and the bike works better. Things don’t exactly become easier when you get into this zone, but they’re more ‘natural.’ Of course it’s a very long season, and not all the races will be the same, so we’ll just try and keep the momentum.” 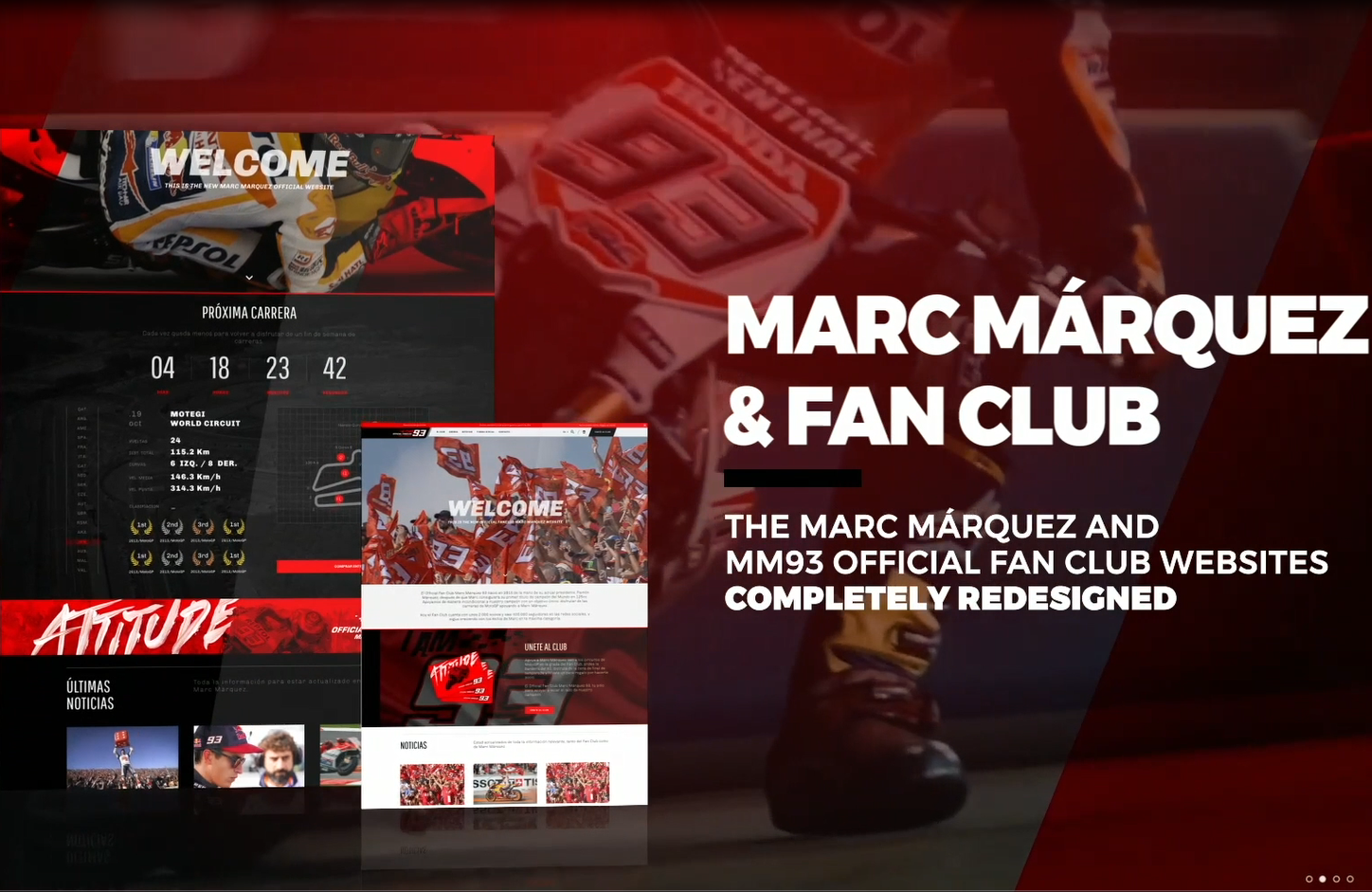 Marc Márquez launches his new website MM93 with the purpose of getting closer to his followers and to allow fans to find information about him, about his passions, his personal and sports life.
A website designed and adapted to all mobile devices to facilitate usability to all users.

The new website includes personal aspects such as his career, his life in Cervera and the reason behind his mascot: the ant. It also has a section to see images and information on the Grand Prix that Marc has competed in MotoGP, Moto2 and 125cc.
In addition you can also see the charity work that Marc has undertaken, and finally there is a section dedicated to his passion, the off-road world.

An important improvement on the website is the new online store, with improved usability so that it is easier and simpler to buy clothes or items, as there is a much wider range of possibilities.

Another website that has been launched is the Official Fan Club Marc Márquez 93, with the main objective of informing all the partners and fans of the rider of all the necessary information to follow Marc: Circuits where the Fan Club is present, location of the stands, day to day news, and all the necessary information for being a member of the Fan Club. 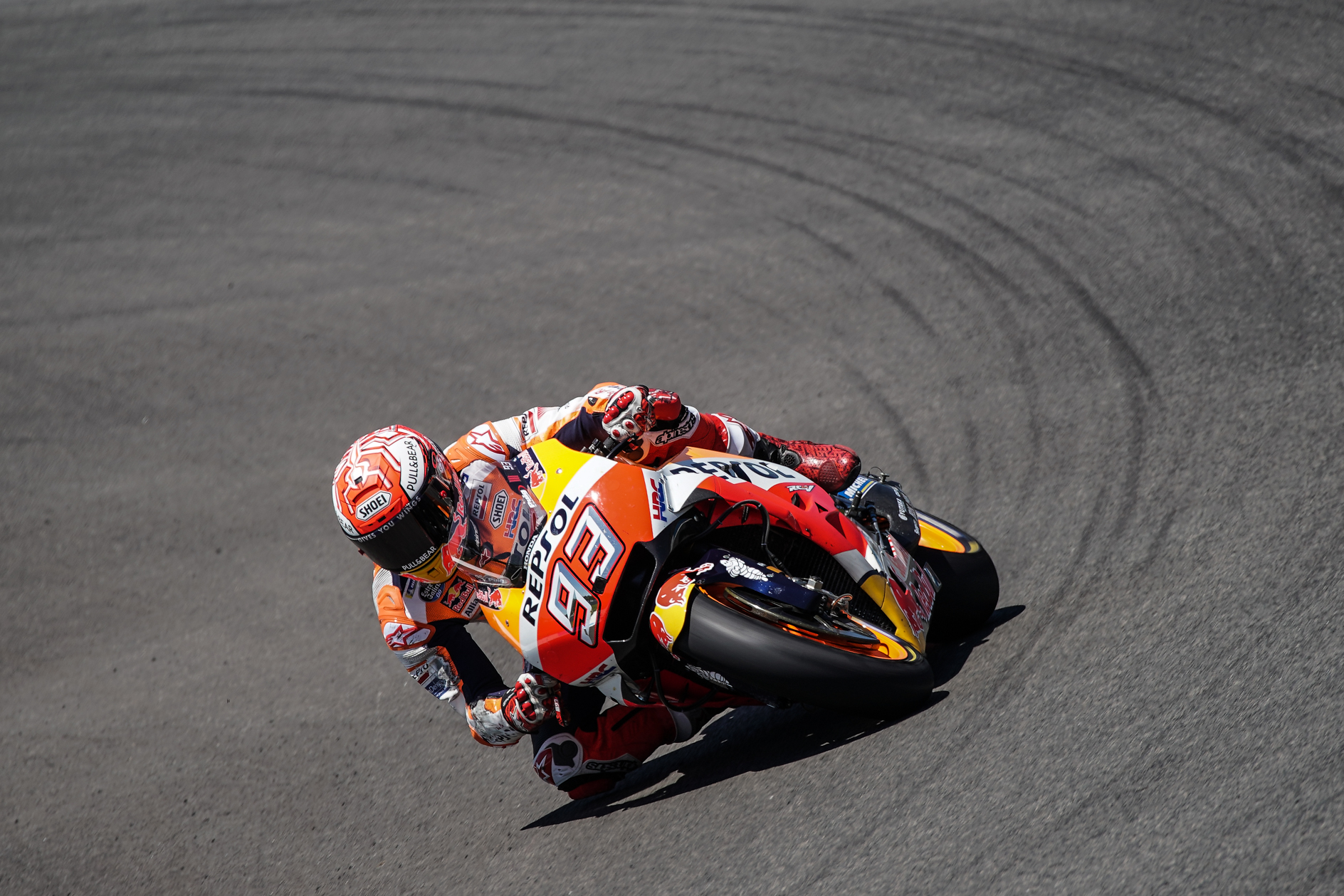 MÁRQUEZ TRAVELS TO FRANCE FOR THE ROUND 5 OF THE SEASON

In the opening four races of the season, Marc Márquez has earned two victories and one second place, putting him top of the overall standings with a 12 point lead over nearest rival Johann Zarco.

Following the Spanish GP, Márquez and Dani Pedrosa took part in two tests: An official test at Jerez, and private test at Mugello in Italy.

Marc Márquez:
“Le Mans is a track where we’ll have to work hard and do our best to try and keep the good momentum. In the past, we’ve been able to win or get on the podium there on some occasions, and other times we’ve struggled to get on pace, but as I always say, every season is different. Of course there will be question marks about the weather, the tyres, and the setup, but our mentality and approach will be the same as always: positive. This year we’re already at a good level as we head to France, so we’ll see how the weekend goes. We’ll try to start well beginning on Friday and then fight for the podium on Sunday.“ 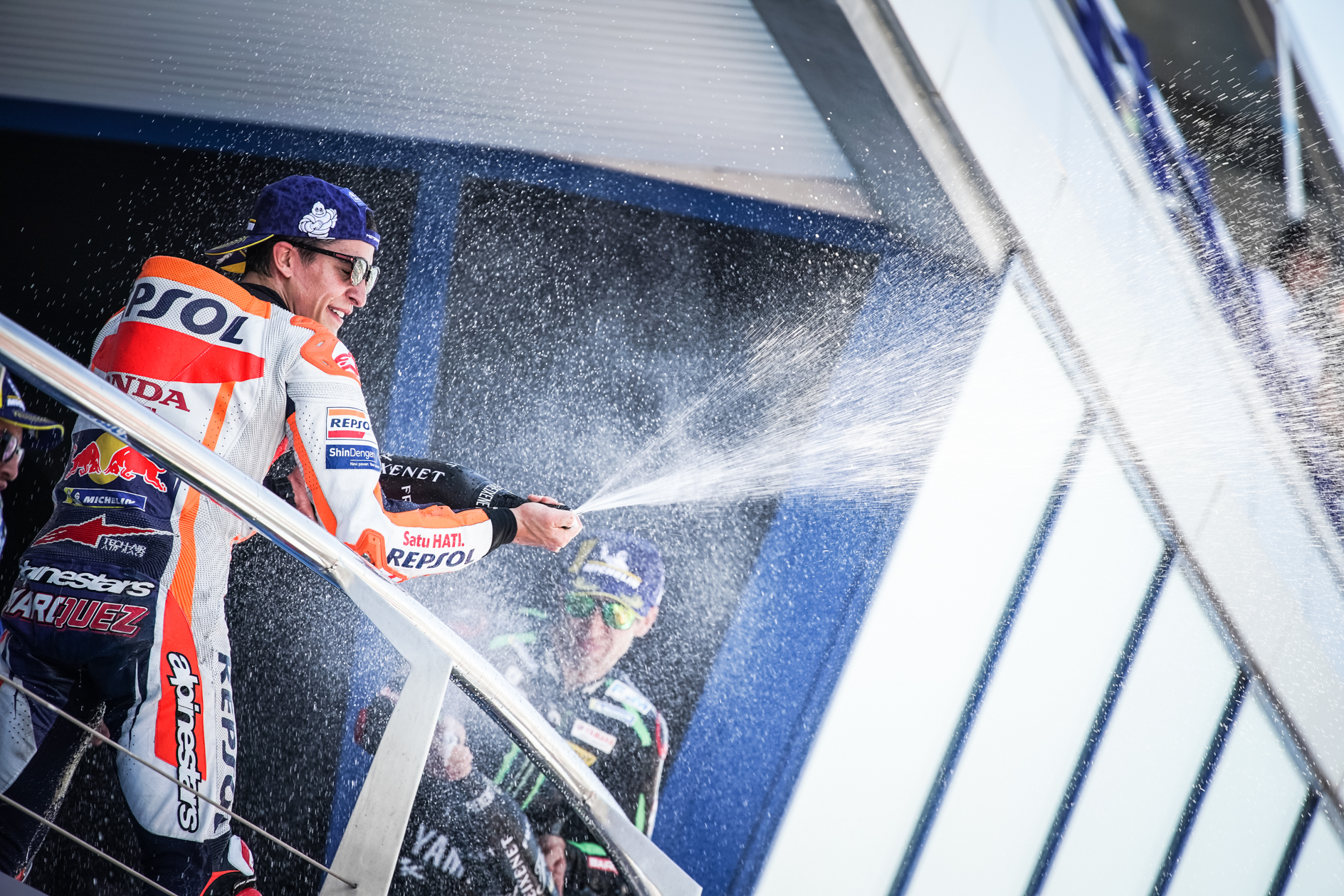 Marc Márquez held onto his starting position, was fourth before finishing the first lap, third one lap later and second the following time around.

He took the lead on the eighth lap and held onto it for his second victory in four races. He heads the overall standings with a twelve point advantage over closest rival Johann Zarco.

Marc Márquez:
“This win in front of these amazing fans is great! I’m very happy with the result, which is especially important at this track, because winning here is usually difficult for me. That said, I was convinced before the start that I could fight for the victory today. It was a tough weekend, but we did good work, and in the end I was able to manage the race in the best way, despite the fact that I wasn’t the fastest rider out there today. The key was the rear-tyre choice; we made the decision after the warm-up to go with the medium, and that was the right move. Then I was able to take the lead at the right moment and push when I had the chance. I also had a big moment when I hit some dirt on the track. When I realized that the asphalt was covered in gravel, it was already too late. I closed the gas, but I had a huge slide! Let’s say it was a bit of a ‘Marquez style’ show! I’m happy to have taken my first win at Angel Nieto’s Circuit, and to have an advantage in the Championship. We’ll have a test here tomorrow, and we’ll try to continue the good work. It will be a long season and we must keep our focus high.”