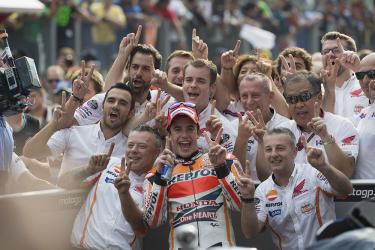 MARQUEZ TAKES 12TH WIN OF 2014 WITH VICTORY IN MALAYSIA

Dani, starting from 2nd on the grid, leap frogged teammate Marc from the start and led the race entering turn one as Marc had a brief encounter with Lorenzo and briefly dropping down to 8th. As the riders crossed the line at the end of the first lap, Lorenzo had taken the lead from Dani and Marc was already up to 6th. On lap two, Marc continued to storm through the field – setting a new record race lap (2’01.150) – and passing Bradl and Dovizioso to move up to 4th, then in the final corner Dani made a small mistake and lost the front, crashing out at a fairly low speed. He was able to remount the bike and rejoined the race in 20th.

Marc now in third began to chase down race leaders Lorenzo and Rossi as Dani instigated his comeback. On lap ten, Marc passed Lorenzo – who had lost the lead to his teammate – and on the final corner Rossi ran slightly wide and Marc was able to pass. Meanwhile Dani had moved up to 11th place but on lap thirteen he lost the front in turn nine and this time was unable to restart. Marc and Rossi put on a good show for the final eight laps but with two laps to go, Marc opened up the throttle and put a three second gap between him and Rossi.

This win in Sepang is Marc’s 12th victory of the season, equalling Repsol Honda’s Mick Doohan’s 1997 record for most wins in a single season in the premier class of racing, and has gifted Honda their 21st premier-class Constructors’ title. 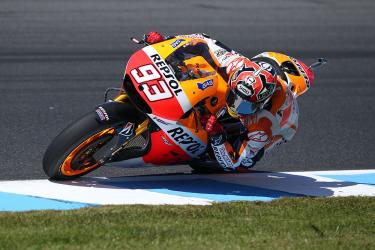 HEARTACHE FOR MARQUEZ THAT CRASHES IN FINAL STAGES OF AUSTRALIAN GP

With ambient temperatures fluctuating throughout the day, Marc lost a few places from pole position, dropping back briefly but then moving back up to first by the end of lap one. Marc continued to push at the front – leading every lap – and opened up a comfortable gap over duelling Lorenzo and Rossi. Marc continued to extend his lead to over four seconds, then on lap nineteen he had an unfortunate crash at the bottom of Lukey Heights.

Now they must pack up and move on to Malaysia for the final race of the three fly aways next week. 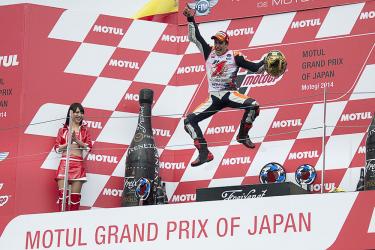 It was a tense start to the race with Marquez dropping places on the first lap. However, he gradually passed Iannone and Dovizioso and by lap fourteen Marc was 3rd, chasing leaders Lorenzo and Rossi. Marc battled with Valentino on lap 15, then finally passed him on lap 16, and began to try and open a gap. Valentino didn’t let him escape and kept the pressure on him until the final lap, with Marc taking second place by just 1 second in front of Valentino and just 1.6s behind Lorenzo. He now has an 82 point lead with just 75 points left to play for in the final three rounds, gifting him the 2014 World Championship.

Marc is the youngest ever rider to win two consecutive premier-class World Championships at the age of 21 years 237 days, taking the record from Mike Hailwood who was 23 years 152 days when he won his second successive 500cc title in 1963. This is the third time which the MotoGP world title has been secured at the Motegi circuit.