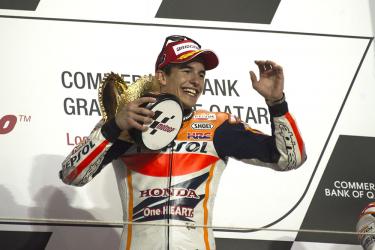 2013 World Champion, Marc Marquez, has started the defence of his title in the perfect way; with a victory in the first race of the season.

It was a dramatic race with pole sitter Marc – the only rider to use the hard rear option tyre today – slipping back to 4th by the first turn. However, Marc started to settle in and made up a position before Jorge Lorenzo made an uncharacteristic mistake and crashed out, thus promoting the Repsol Honda duo a position each. Marc battled with Gresini Honda rider, Alvaro Bautista, for a few laps before passing him but then lost a position to Valentino Rossi. The two riders then began to chase down race leader, LCR Honda’s Stefan Bradl.

The following lap, Dani passed Bradley Smith to take 3rd and then went after Marc and race leader Valentino Rossi. With some fantastic close racing, Marc finally made a move on Rossi on lap fourteen and led the race for the first time. Then on lap twenty-one – the penultimate lap – Marc and Rossi began to push for the win, passing each other on four occasions, Marc finally came out on top to take the victory and his first win since Aragon last year.

This first victory of the season marks Honda’s 250th in MotoGP, making them the first manufacturer to reach the milestone of 250 wins in the premier class of Grand Prix racing.