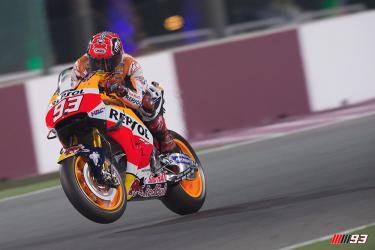 Marc Marquez already knows what is to win in Argentina and has set the best time in practice in the two previous visits to the Argentinian track.

The MotoGP World Championship arrives in Argentina this week for the second round of the season. After the podium finish by Marc Marquez at the Qatar Grand Prix and the improvement shown by the Repsol Honda Team in the opening event, the next challenge for Marquez comes at the Termas de Rio Hondo circuit. Marc Marquez already climbed to the first place of the podium in the inaugural event held at the track on 2014, and he has set the best time in practice on both visits there. It will be the first time the riders compete at a track where they did not test this past winter, after an intense preseason that took in Sepang, Philip Island and Losail, and the goal will be to adapt as soon as possible –in order to be competitive once again in Sunday’s race.

Marc Márquez: “We come to Argentina in a positive mood after achieving a third-place finish in Qatar, a result that wasn’t really predictable before the start of the season. We worked very hard and very well with Honda and with the team over the weekend, and on race day I was able to push as hard as is currently possible. Of course we haven’t had a winter test here to count on and we’ll have to see if the setup we found in Qatar will also work here. That would be a good step forward for us, generally speaking, and we could even aim for a little bit better result on Sunday. Of course it will be a question mark until Friday but all in all, Argentina is a circuit that I like. We’ve always been fast here, so I feel positive for the weekend”. 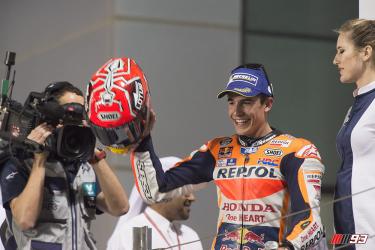 Third position for Repsol Honda Team rider, who pushes for second on the rostrum in Qatar until the final corner.

Marc Marquez opened the 2016 MotoGP World Championship with third place at the Grand Prix of Qatar. The floodlights at the Losail International Circuit lit up an intense race, in which Marquez was always amongst the leading group. The Spaniard pushed for second place right until the end, battling with Andrea Dovizioso in a fight that would only conclude on the final corner. He placed on the rostrum behind race winner Jorge Lorenzo and Dovizioso.

Marc Marquez: “I’m happy with this third place because I know that we gave our all and just two weeks ago we were one second off the pace compared to the other guys on the podium. I want to thank Honda and my team for all the hard work they are doing. The race was faster than we expected and we had a great weekend, because we got 100% out of our performance at a circuit that we find hard. I spent much of the race behind Dovizioso because I couldn’t pass him, and it was difficult to make up the ground lost with his better acceleration on the straight. Whenever I got close, I’d lose him again. Although I knew it would be difficult, I made another attempt with 4 laps remaining −but he overtook me on the last lap. I tried again in the last corner but it wasn’t possible. I hope that the circuits coming up on the calendar favour us a little more.” 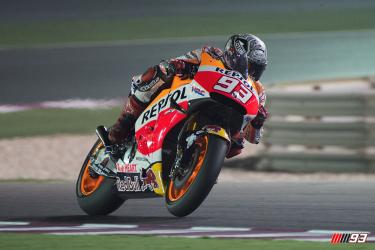 One more year, Qatar will open the World Championship at Losail International Circuit. Marc Márquez won there in 2014 and took the podium in 2013.

The Losail International Circuit will be lit up once again this Sunday, on the occasion of the Qatar Grand Prix. The 2016 season opener for the MotoGP World Championship is once again the only night race on the calendar –and the only event to feature three days of practice, beginning on Thursday. Marc Marquez won at the track in 2014 and took another podium in Qatar in his rookie year the previous season. Dani Pedrosa has been on the rostrum five times. Following a preseason in which Repsol Honda have visited Malaysia, Australia and Qatar itself, and worked on adapting to the premier class’ new rules, Marquez and Pedrosa are optimistic ahead of the first race of the year.

“The season is finally about to start, and I’m looking forward to it. When we came here two weeks ago we did a big step forward with the setup at the very end of the test, and I really felt at ease with the bike, especially in my last run that was quite late in the evening, with the dew already starting to form. That’s positive in view of the race, even if we’re not yet where we’d like to be and still have a margin for improvement with the setup. The Losail layout may not be the most favourable of the season for our bike, but in the past we’ve scored a podium and a win here with the RC213V, so we’ll fight to get the best result on Sunday. This year there are a few variables that aren’t yet completely predictable, such as tyre wear at race distance, for example, and the bike’s behaviour with the new electronics. Still, Honda never cease to work hard, as is the case for me and the whole team, so I’m positive and look forward to the action starting!“