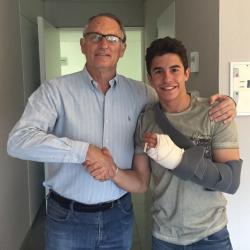 Repsol Honda rider operated on this afternoon to treat fracture to little finger of left hand, suffered while training dirt track. His participation in the Spanish Grand Prix has not been ruled out.

Reigning MotoGP World Champion Marc Marquez has been successfully operated on this afternoon by Dr. Xavier Mir, Head of the Unit for Hand and Upper Extremities Pathology at the Hospital Universitario Quiron Dexeus in Barcelona.

Dr. Mir commented after the surgery that Marquez had “attended the casualty department of the Hospital Universitario Quiron Dexeus having suffered a crash in training this morning. The patient presented a deformity to the little finger of his left hand and a subsequent X-Ray showed a fracture of the proximal phalanx, with displacement. Therefore, we decided to treat the injury -as we would in the case of any other patient- by fixing a titanium plate to his finger. This will allow us to initiate functional recovery after 24 hours and give him a chance of racing at Jerez.” 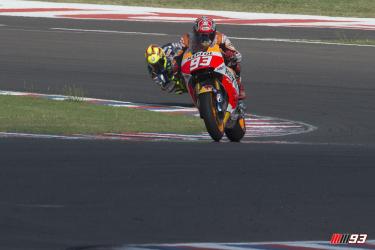 DISAPPOINTMENT FOR MARQUEZ AND AOYAMA IN ARGENTINA

Repsol Honda’s Marc Marquez enjoyed a strong start from pole position, tussling for first place on the opening lap with Lorenzo and Aleix Espargaro and took the lead as they crossed the line for the first time. He pushed to open a gap over the rest of the riders and by lap thirteen he was benefitting from his hard option rear Bridgestone tyre – the softer of the compounds available – and had opened up a 4.2s advantage over a chasing Valentino Rossi.

Teammate Hiroshi Aoyama dropped back at the start from 15th to 22nd on the first lap and gradually progressed through the pack to reach 14th by lap twenty-one. Meanwhile Rossi continued to chip away at Marc’s lead as Marc’s tyre life began to drop and Rossi’s extra hard tyre choice was coming into it’s element. With seven laps to go the gap was down to just two seconds and with three laps to go it was down to half a second as the riders began to battle. With two laps remaining, they jostled for first place then in the next corner they touched and as they picked the bikes up Rossi’s rear wheel collected Marc’s front and the reigning World Champion hit the ground. Despite running to his bike to rejoin the race, Marc soon saw this was not possible and had to accept his race was over.

In the final five laps, Hiroshi continued to fight and was up to 11th on the last lap when he was hit in the final turn by Petrucci and unfortunately crashed out of the race also. Race direction reviewed both incidents immediately and docked a penalty point from Petrucci but considered the contact between Marc and Rossi a racing incident.

It was a disappointing end to a strong weekend for the team. Now they must pack up and head to Spain for the first round of the European races which takes place on Sunday 3rd May. 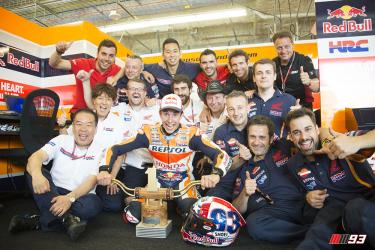 Repsol Honda’s Marc Marquez has returned to winning form in the Red Bull GP of The Americas with teammate Hiroshi Aoyama – replacing Dani Pedrosa – fighting to the last lap to take 11th place.

Pole man Marc dropped back briefly from the start to 2nd place behind Dovizioso whilst Hiroshi got caught up and found himself 20th, from 16th on the grid. By lap five, Hiro had climbed to 13th and after a brief battle with Dovizioso, Marc took first place.

With Rossi and Iannone fighting with Dovizioso, Marc never looked back and led from the front for the remainder of the race – taking his 20th victory in the MotoGP class. Hiroshi progressed further and reached 11th place, which he briefly lost on the final lap, but showed a fighting spirit and re-passed Barbera taking 11th.

Marc has won on all six occasions that he has raced in the MotoGP class in the USA, and Honda celebrate their 11th consecutive win on American soil. The last non-Honda MotoGP winner in the USA was Jorge Lorenzo, at Laguna Seca in 2010.

Now the team must pack up and head straight to Argentina for the third round of 2015. 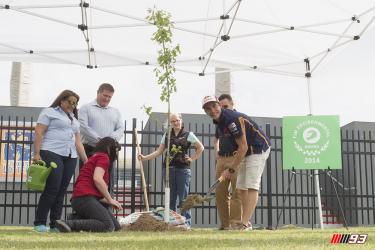 GARDEN OF THE CHAMPIONS

The reigning MotoGP™ World Champion planted a tree bearing his name in a privileged place within the Plaza as part of the FIM’s #RideGreen campaign. Incorporation of the Ride Green information point in the main plaza with the participation of volunteers of Texas University, sustainable transportation, CO2 offsetting, composting, reduction in the consumption of resources, education of the public..