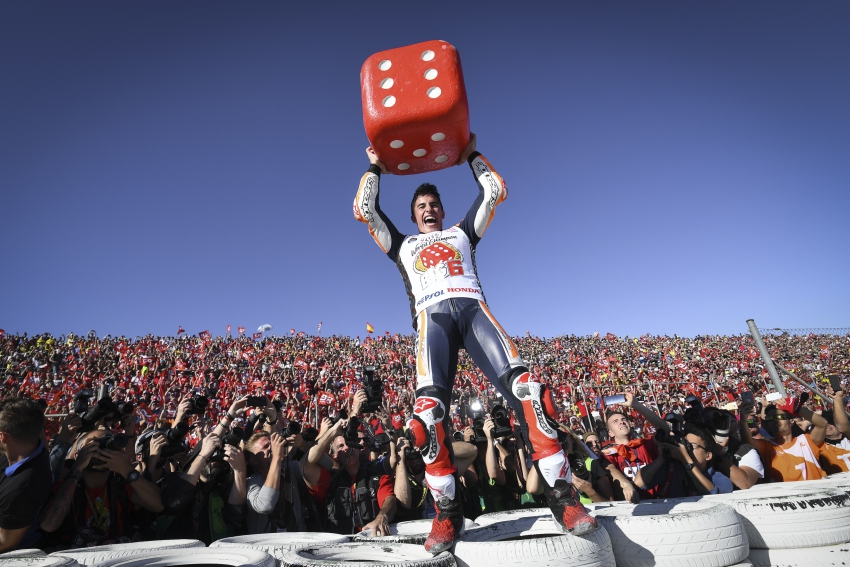 Márquez saved a crash at Turn 1, just after overtaking Johann Zarco, and came back on track in fifth. He would eventually climb to third.

With this result, Marc Márquez became MotoGP World Champion once again today at Valencia in the final race of the season. Aged 24 years and 268 days, the Spaniard continues to break records in Grand Prix racing, and is now the youngest rider in history to achieve six titles. In addition, he enters the exclusive club of the ten riders with the most World Championships and becomes the Spanish rider to win the most premier class titles.

One of the closest MotoGP seasons in recent years went the Repsol Honda Team rider’s way thanks to his immense determination. After a start to the campaign in which he was as low as fourth in the standings after six races, Márquez put together a run of ten podiums from a possible twelve, leading the series twice and sealing the title at the last round of the year.

Márquez confirmed World Championship number six at the same circuit where he was crowned MotoGP king for the first time in 2013, and where he also took the first of his titles in 125cc in 2010. This season the Repsol Honda rider has taken six victories, six further podiums and eight pole positions.

Marc Márquez: “I’m living a dream. ‘Six Titles’ are big words. The truth is that I’m incredibly happy because we worked so much this year, and today the race was incredibly tense and exciting—a bit ‘Marquez Style.’ I made a mistake, but I also made my best save of the year. From that moment on, I just tried to finish the race in a good position. I’m sorry that Andrea didn’t finish the race, as he deserved to do so. He had an incredible season and I would have liked to have him on the podium with me today. The key to the year has been our mentality. In our world it’s very important to remain positive and motivated during the difficult moments. Some things happened to us at the beginning of the season but when we found the way to sort things out, everything went better. Congratulations to Honda and the entire team for the Triple Crown. It’s an amazing achievement. Winning the Title at the last race of the season in front of our fans is one of the best things possible, really special. Now I want to enjoy this with my entire team and my family, and after that we’ll start to work for next year.”

MÁRQUEZ LOOKING FOR HIS 6TH WORLD CHAMPIONSHIP IN VALENCIA

Repsol Honda rider comes into the last round of the season with a 21-point advantage.

Marc Márquez will seal the 2017 MotoGP World Championship if he finishes in the top eleven – and takes at least five points – or if Andrea Dovizioso does not win the race.

This season, whenever the reigning World Champion has crossed the finish line, he has done so in the Top 6. At Valencia, Márquez has not been off the podium since coming up to MotoGP.

The Repsol Honda rider has won two of his five titles at the Ricardo Tormo Circuit: The 125cc title in 2010 and his first in MotoGP in 2013.

Marc Márquez: “Of course it will be natural to feel some pressure in Valencia with so much at stake, but honestly there has been pressure for the entire second part of the season. And the fact that we’ve been able to manage some tricky situations, as was the case at the last race in Malaysia, gives me a positive feeling. Regarding the track, I feel good because I like Valencia. It’s an anticlockwise circuit, which normally suits me. Of course it’s also good to have a points advantage to manage. That said, we won’t think too much about any of those things. We definitely don’t think it will be easy, so we won’t go to Valencia with any extra confidence. We’ll keep the same mentality and working method that have brought us to where we are, and we’ll give 100 per cent because it will be important to be fast beginning with FP1.”