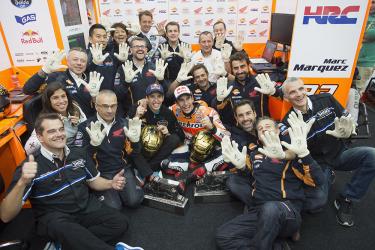 MARQUEZ BREAKS ANOTHER RECORD WITH VICTORY IN VALENCIA

It was another complicated race with rain constantly threatening to arrive. Marc in 5th traded positions on the opening lap as the race began at a very quick pace with riders jostling for position. Dani fought with Crutchlow in the early laps but finally completed the pass into 4th and joined the battle for the podium. Meanwhile Marc attacked Rossi – setting a new record race lap of 1’31.515 and passed him on lap ten and after a brief battle with Iannone on lap eleven, finally took the race lead. The following lap Dani also passed Iannone and began to chase down Rossi and Marc.

Then with twelve laps remaining small spots of rain began to appear. Lorenzo entered the pits for his wet setup bike, but fortunately for the other riders the rain never arrived. Although lap times fluctuated, Marc was able to control his lead and Dani consolidated third place resulting in Repsol Honda winning their 7th Team Championship (since the beginning of the MotoGP class in 2002) to add to the Rider and Constructor Championships and marking Honda’s third Triple Crown in four years and second in succession.

The 2014 season is now officially over but the 2015 season will begin tomorrow with a three day test in Valencia.