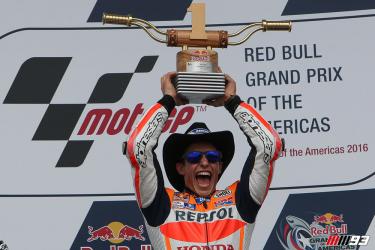 TENTH VICTORY FOR MARC MARQUEZ IN THE USA

Repsol Honda Team rider claims fourth win at the Circuit of The Americas –his tenth on North American soil.

Marc Marquez returns to Europe with a successful haul from the MotoGP World Championship’s American leg, following up on his win last weekend in Argentina with a victory in the USA this Sunday. The Repsol Honda rider now has an amazing ten straight victories Stateside –eight in MotoGP, and two in Moto2. Starting from pole position, Marquez took the holeshot in the race and led from the first lap to the chequered flag. With this result, Marquez tops the overall standings with 66 points.

Marc Marquez: “I’m very happy with how the whole weekend has gone. This is a circuit that I like, one of my favourite, but there were some unknowns here because just before the race we decided to run the soft front tyre. In the end the team advised me very well, because the change gave me the good feeling with the bike that I had partly lost in the warm-up. I have to thank them all, as well as the Michelin technician. When I asked, they told me that I would be okay for the first 12-15 laps, and then after that I would have to manage the situation more, which is exactly what happened. We’ve taken another victory here in Austin and are now on a run of four in a row, which is great. In addition, the joy of the team after we won illustrates everything we’re working on. In these first three races of the year, we’ve made good use of the situations that we’ve encountered.”