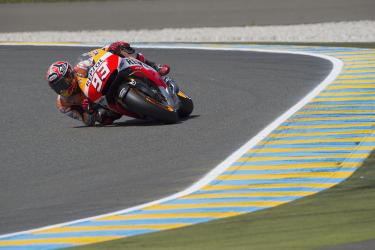 Marc Marquez has enjoyed a perfect weekend in Le Mans taking pole position (with a new record), setting a new fastest race lap (1’33.548 on lap 8) and crowning it with the victory (in a record time) in front of 88,222 spectators. He also became the youngest ever rider (21 years and 90 days) to win five successive races in the premier class, taking the record from Mike Hailwood (22 years and 160 days old).

It was a chaotic start to the race with Marc slipping back from pole to ninth – after being pushed wide by Lorenzo –. As things began to settle down, and the race found it’s tempo, Marc started to pluck off the riders in front of him and by lap seven he was already up to fourth, with Dani also passing Smith and Dovizioso into seventh by lap nine. Marc then set the fastest lap of the race en route to passing Stefan Bradl and Pol Espargaro, and by lap thirteen he was on the tail of race leader Valentino Rossi. A slight error from the Italian gifted Marc first position and from this point he didn’t look back.