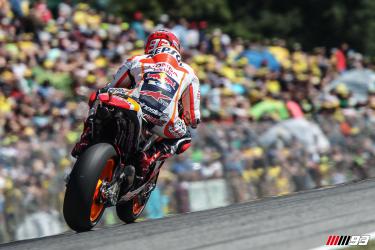 Marc Marquez has two victories at the Circuit de Barcelona-Catalunya: One in 125cc in 2010 and one in MotoGP in 2014. Cervera rider look to carry the positive momentum of Mugello over to Catalan GP this weekend.

The MotoGP World Championship returns to the Iberian Peninsula this weekend to celebrate the seventh round of the year, after a thrilling race a fortnight ago in Italy. The event at the Circuit de Barcelona-Catalunya will be a special one for Marc Marquez, who will be competing in front of his home fans. Marquez lies second in the World Championship with 105 points -10 points off the lead. He has finished on the podium at 5 of the last 6 Catalan GPs (spread over 125cc, Moto2 and MotoGP races).

Marc Marquez: “There’s nothing like racing at home in front of your crowd and your fan club to make you feel good and give you extra motivation, even if in the end you must try and be as professional as always and to completely focus on the job at hand. We’ll see how it goes there, and as always we’ll work hard on the bike setup in order to make the most of what we have, an approach that has worked well enough so far. I know that Honda is working at 100% and at Montmeló we’ll give our best to get another good result. Then at the Monday post-race test we’ll see if we’re able to find that half a tenth that could help us a lot, as we were able to do last year on the same occasion“.