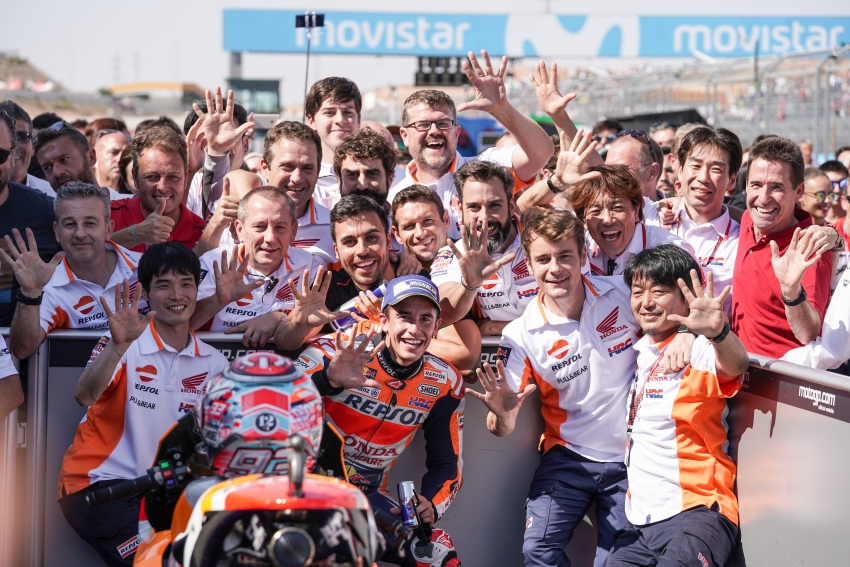 VICTORY AND REINFORCED LEADERSHIP FOR MÁRQUEZ IN ARAGÓN

Márquez took his fifth victory of the season and reinforces his lead in the standings, where now stands at 16 points ahead of Andrea Dovizioso.

Marc Márquez: “I’m very very happy with this victory because it was a tough race. Yesterday I wasn’t feeling totally comfortable with the bike, and today I was struggling again except in the warm-up; I don’t really know why. Anyway, racing at one of my favourite tracks, close to my home and in front of my fans, gave me extra motivation. I pushed hard and in some corners I just clicked the off-button in my head, even if I crashed twice yesterday. I saw that Viñales and Dovizioso were struggling a bit and knew it was the moment to push, so I did. There were a few scary moments, once when I was trying to overtake Valentino; he was tighter in that corner than I was expecting, and to avoid a clash I released the brakes, only to realize that Lorenzo was right there! So I went off the track, and at that moment I cooled down a bit, even if I continued to try and close the gap. Once I passed Lorenzo, I had to keep going as I saw that Dani was coming very fast. Anyway, that’s the Marquez style! Of course it’s important to think of the Championship, but the situation now requires that we give it everything. So we’ll try to continue with the same motivation and mentality race by race, giving our 100 per cent.”