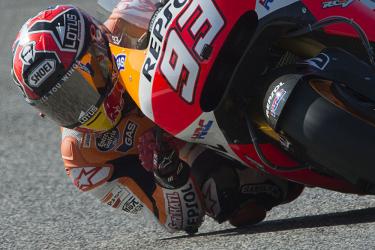 ONE POINT FOR MARQUEZ

After a promising start, Marc steadily progressed up to second, after battling with Jorge Lorenzo and Valentino Rossi. However, as Marc pushed to try and stay with race leader Valentino, he made a small mistake and lost the front in turn four at a fairly low speed, with the bike spinning out. He was able to pick the bike up but had trouble getting it started again. Finally race marshals arrived and managed to bump start him, but by this point the pack had disappeared.

Marc pushed hard to catch the back markers and was able to match the lap times being set by the from runners, but the distance was too great. He crossed the line in fifteenth and took a single Championship point.

Marc maintains his lead in the Championship, but the gap is now decreased to 74 points over second place Dani, with Valentino now just 1 point behind him.