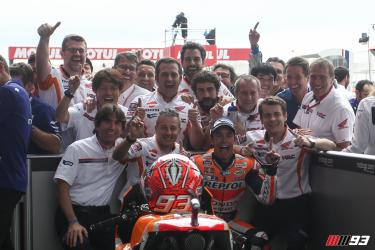 Marc Marquez took a thrilling victory at the Argentinian Grand Prix. Cervera rider fought back from fourth position at the end of Lap 1 –after being hit by Andrea Iannone– to first in just three laps. He would then withstand a push from Valentino Rossi until the moment in which a mandatory bike change was required –after which Marquez extended his lead with every lap to cross the finish line alone. After these results, Marquez occupies first place in the overall standings.

Marc Marquez: “I’m really happy with this win because we’ve worked very, very hard during the pre-season, in Qatar and here. Honda is working very well and I feel the support; we’re going in the same direction, and that’s the most important thing. It’s a special win, not only because it’s the first one of the year but also because with the team, we managed the situation very well, and after what happened in Australia on a similar occasion [in 2013], it was important for us to do well. I knew that the first part of the race would be tough because it was still damp in some places, and with the first bike I hadn’t felt as good as with the other one even during practice. I knew that the second part of the race was the key. I pushed 100% in the first five laps after the bike change, I opened a gap and after that I just kept the distance.“