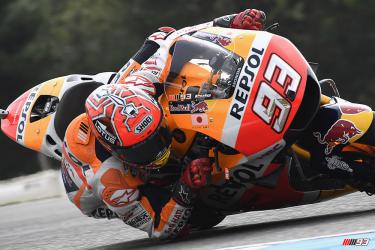 Marc Marquez has two victories at the Silverstone circuit: One in 125cc in 2010 and one in MotoGP in 2014. After eleven races, the Cervera rider leads the series with a 53-point advantage over his closest rival.

The MotoGP World Championship contests its twelfth round of the season this weekend at Silverstone –a former airport during World War II. Marc Marquez comes into the British Grand Prix as leader of the MotoGP standings with 197 points –53 more than his closest rival. The Repsol Honda Team rider also has good memories of this weekend’s venue: He won at Silverstone in 2010 in 125cc and 2014 in MotoGP, in addition to podium finishes in 3 of his last 4 appearances there (in Moto2 and MotoGP).

Marc Marquez: “Silverstone is a place where the weather is generally quite unpredictable, meaning that cold and rain are variables you have to be prepared to face. We’ve encountered ‘mixed conditions’ situations more than once this year, and we saw how important it is to remain focused and make the right choices. We’ll see what happens during the weekend and we’ll try to manage the situation with the same mind-set that has gotten us this far. I like the track a lot; it has a slower first section but then there’s a series of ‘esses’ where it’s possible to make the difference if you find a good setup for the bike. I’ve always enjoyed racing there and we’ll push at the maximum to get the best result possible“.