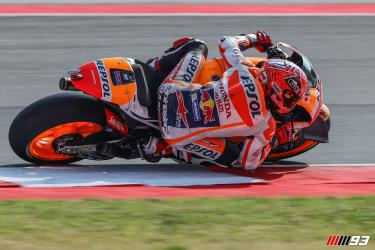 MARQUEZ IN TOP FORM AHEAD OF ARAGON GP

Marc Marquez has two victories at MotorLand Aragon: One in Moto2 in 2009 and another in MotoGP in 2013. The Spaniard has a 43-point lead in the MotoGP standings with 5 races remaining, and is the only rider to have scored points at every race this season.

The MotoGP World Championship reaches its fourteenth round of the season at the MotorLand Aragon circuit in Spain –one of the most special events for Marc Marquez. The rider from Cervera arrives at Aragon as the series leader with 223 points, 43 ahead of the rider in second place with 5 races remaining. He will be one of the main protagonists at one of the closest races to his native city, and a track where he has a win in both Moto2 and MotoGP –as well as 5 pole positions from 6 races.

Marc Marquez: “Aragon is a circuit that I like more than Misano, and I think it suits my riding style better. That said, it’s also true that a particularity of this year is that things may change a lot from race to race, so we’ll see if we’re able to manage things well and if we can have a good weekend. We’ll approach the race ready to adapt to the situation we encounter, but of course we’ll try to fight for the podium again in front of my home crowd and my fan club”.