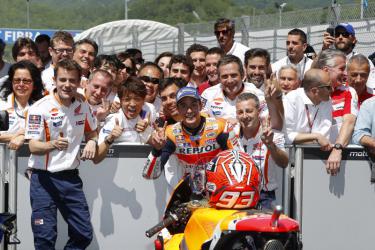 The Italian Grand Prix provided another spectacular race for MotoGP fans, from the first lap to the last. Marc Marquez would have a big role in the action, placing second.

Despite a poor start, Marquez was up into third by Lap 2. Ten laps in, an engine breakdown for Valentino Rossi cleared the way, and Marquez’ pursuit of Jorge Lorenzo was completed at the halfway mark. On a dramatic final lap, featuring several passes between the pair, the winner would be decided on the home straight. Lorenzo bested Marquez by 0.019s, thanks to his use of the slipstream.

Following the Italian GP, Marquez is second in the MotoGP World Championship with 105 points, while Pedrosa is fourth with 66.

Marc Marquez: “Today we made a good race, we managed to get very close, and finally we made the podium which is always positive, but even with the slipstream I wasn’t able to overtake Jorge. We struggled throughout the weekend with acceleration and top speed. I tried to give my all and I did the best race I could do today, I really tried everything. I took several risks in an attempt to win, but on the home straight Jorge slipstreamed me. Now we have to keep working on acceleration because we’re still lacking a little in that regard. Honda is working hard back in Japan, as we do at the tracks and we’ll try to take a step forward ahead of the next race”.