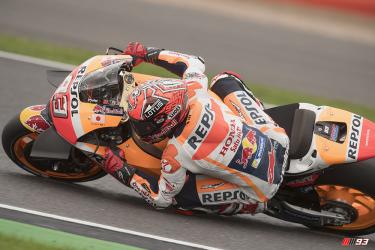 Marc Marquez has achieved victory at Misano in three classes: Once in 125cc (2010), twice in Moto2 (2011 and 2012) and once in MotoGP (2015).He gets to San Marino being the only rider in the World Championship to have scored points at every Grand Prix.

With little rest after an exciting race at Silverstone, the MotoGP World Championship travels to Misano, Italy, for its thirteenth round of the season. The Grand Prix of San Marino and the Riviera of Rimini takes place this weekend, and Marc Marquez comes into the event still leading the series. He won at last year’s event, and also has victories there in all three classes (125cc, Moto2 and MotoGP). Marquez leads the standings with 210 points, 50 ahead of his nearest rival.

Marc Marquez: “All in all we got an okay result in England, as even though we didn’t make the ideal choice with the front tyre, in the end we lost just three points. Now we head to Misano, which is quite a different track as it is twisty and slow. In San Marino I expect to fight again for the podium if we work well during the weekend. I’m happy to go racing in Italy, where I really hope the weather will be nice and give us the chance to make the most of every session“.