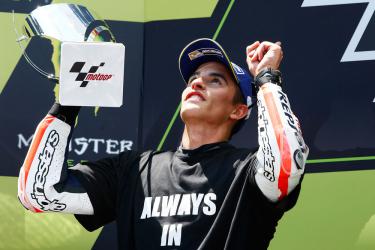 Raceday at the Catalan GP began with an emotional minute’s silence in memory of Luis Salom and culminated in an exciting MotoGP race, in which Marc Marquez finished second. The three riders on podium paid tribute to Salom -who died on Friday following an accident in practice- on the podium.

Overtaking moves were exchanged at the start of the race, before Rossi and Marquez settled in at the front with Pedrosa close behind. Three laps from the end, Marquez pushed for victory, but after several changes of position with the Italian, a mistake on the penultimate lap led to him settling for a positive second position. With this result, Marquez returns to the top of the World Championship standings with 125 points, 10 more than Jorge Lorenzo –who failed to finish after a collision with another rider.
The positive end to a difficult weekend for the MotoGP paddock was a handshake between Marquez and Rossi at the conclusion of the race.

Marc Marquez: “It has been a hard weekend for all the riders, but in the end I think that together we paid tribute to Luis Salom with the Sunday that he deserved. It was a nice race with Valentino. I was suffering a little with the increase in temperature and was never completely comfortable, so I was unable to try overtaking at the right time. I had a couple of scares and started doing the math for the standings in my head, knowing that Jorge Lorenzo was out of the race, and I think that in the end, a podium finish is a very positive result for the Championship. Another thing that’s important for motorcycle racing is that Valentino and I shook hands; it was probably the weekend and the right situation to do so”.