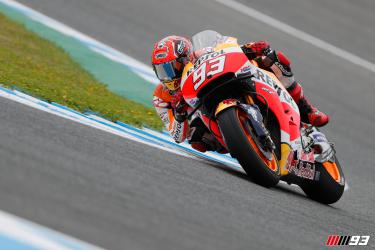 Marc Marquez is the only MotoGP rider to have finished on the podium at every race so far this season. At Le Mans, Marc Marquez has taken 3 pole positions from 3 MotoGP races.

The French Grand Prix is the second European round of the year for the MotoGP World Championship. After leaving the Circuito de Jerez with a good feeling just over a week ago, following a positive race and Monday test, Marc Marquez is back in action this weekend at the historic circuit of Le Mans –where he hold previous victories. Marquez comes into the French round leading the overall standings, thanks to two wins and two third positions from the first four races.

Marc Marquez: “I like the Le Mans track although it requires that you be ready to deal with many variables. To begin with, the weather: you never know what it will do there. Last year the temperature rose significantly on Sunday and we suffered a lot with front grip in the race. Rain also isn’t unusual there. In addition, the track has a stop-and-go layout, with many slow turns where braking and acceleration are crucial. We’ll see if we find ourselves in a situation similar to Austin, where acceleration out of slow corners was a lot better than expected, or if we have to face a bigger challenge. During the last test in Jerez, we worked a lot on electronics and the chassis setting to find more grip, and on the balance of the bike to reduce wheelying. It’s always a compromise but I think we’ve gathered useful info for Le Mans and, knowing how far we’ve come since this winter and how quickly we’ve been able to react to many situations, I feel confident and look forward to starting the next racing weekend.“