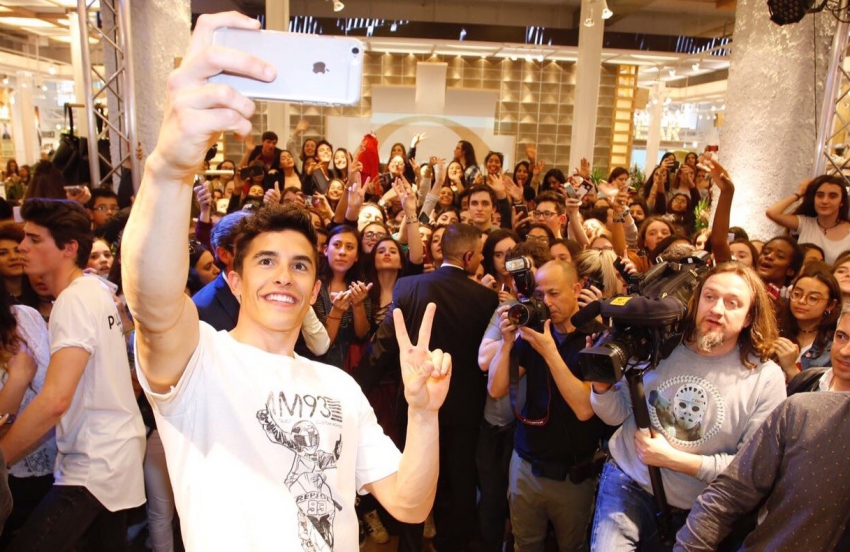 Marc Márquez has presented in Madrid his first casual clothing collection together with the international brand Pull&Bear. The current MotoGP World Champion has unveiled the clothes he has designed alongside the brand’s creative team. On the occasion of the launch, Pull&Bear and Marc Márquez have organized the #MM93fanday, a huge encounter with fans in the macro shop that the Inditex brand has in Hermosilla street in Madrid.

The flagship shop of Madrid, the largest of the brand’s 960 stores around the world, was overwhelmed by the influx of hundreds of Márquez’s fans, who filled the store to meet the collection and greet in person the five-time world champion. They were joined by followers of the special guest of the day, the Mexican youtuber Juanpa Zurita, international star of social networks, and the rest of Marc’s influencers team: Dutch model Cindy Kimberly or Spanish influencers Álvaro Mel, Paula Baena, Manu Ríos and Álex Puértolas.

The music was put on by Electric Feels, a duo composed of two 13-year-old twin brothers who have made a sensation in recent music festivals, and the well-known Miranda Makaroff & Pascal Moscheni, who animated the day until closing time.

#MM93xPullandbear is a collection of urban air-conditioned casual clothing that reflects the main icons of the rider and some of the key moments of his career. The Spanish rider and Pull&Bear share values such as youth, spirit of improvement, teamwork and international projection.

The collection is already marketed in the main Pull&Bear stores around the world and in its online store www.pullandbear.com, as well as in the official website of the rider and at the Official Fanclub Marc Márquez 93 store, in Cervera.