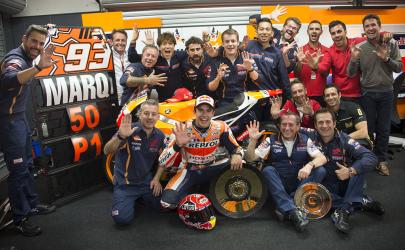 The race began at a rapid pace, with Lorenzo, Iannone, Marc, Dani, Rossi and Crutchlow leading the way. Lorenzo pushed at the front trying to open a gap as the other riders jostled for position behind him. By lap seven, Marc had slotted in behind Lorenzo as the other riders continued to battle, constantly swapping position.

Despite constantly passing one another, Marc, Rossi and Iannone caught up with Lorenzo and on lap eighteen Marc took the lead briefly, but it only lasted three laps. Marc, Rossi and Iannone continued to fight and Marc dropped down to 4th with just two laps to go. However, he never gave up hope – passing Rossi on the penultimate lap into 3rd – and on the final lap making up two places whilst recording the fastest lap of the race and taking the victory by just 0.249 seconds over Lorenzo.

Marc’s win here is his 50th in his career and his first in the MotoGP class at Phillip Island – only victory at Motegi eludes him – from circuits on the current calendar.