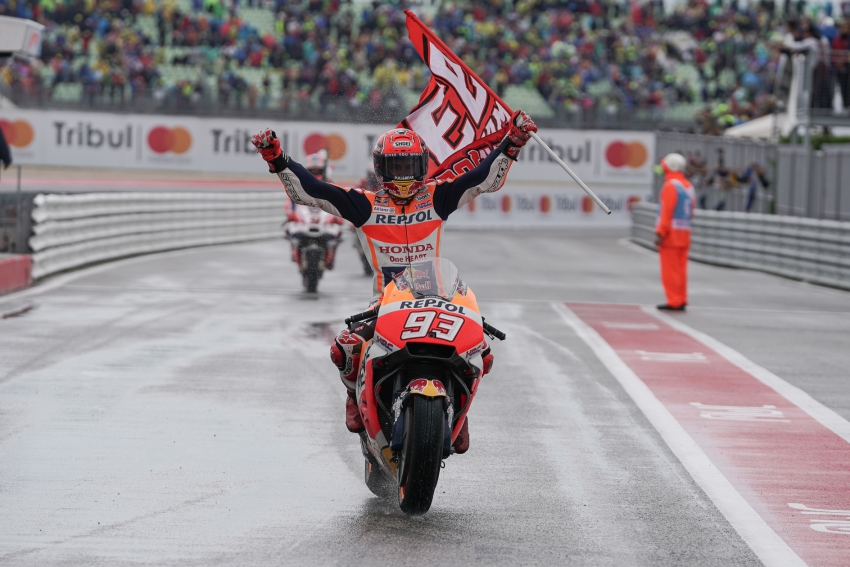 Marc Márquez sets the fastest lap of the race -1:47.069- on his last lap, after overtaking Petrucci on his way to his fourth win of the season.

Marc Márquez: “This was one of the best races of my career. It gave me an amazing feeling because it required incredible concentration to manage the tension the whole time. It was very easy to make a mistake, and that’s why I decided to attack only on the final lap. That lap was amazing; I took many risks, but with such a close season, it was worth trying to get the five extra points for the win. Of course I was thinking about the Championship the whole race. At the beginning the feeling wasn’t so good, probably because there was so much water on the track, and I had a couple of very scary moments. Lorenzo was amazingly fast early on, and so was Danilo later when he took the lead after Jorge’s crash, but I was able to follow him and finally to attack. Thanks to the team for the great job. I’m happy for everyone after what happened at Silverstone. We always try to be ready for every situation, so because we knew that changing the setup from wet to dry takes quite a long time at this track, we agreed that if I felt the track was drying, and there was even a small possibly of a flag-to-flag race, I would signal the team. So I did, and even if in the end that didn’t happen, it was right to do so as we got close to it. This Championship is amazing; anything can happen, but now we’ve returned to the top, equal on points with Andrea. The last five races will be very tough, but we’ll keep pushing and give it our 100%. Finally, I wish to congratulate Toni Bou for his 22nd title, it’s just amazing. Keep doing like that, Toni!”