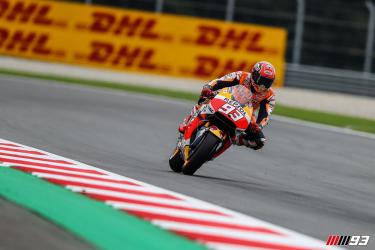 Marc Marquez salvages points from the Austrian GP after two difficult days of practice, placing inside the top ten in a tough race. The World Championship leader had started from fifth on the grid, and kept the spot at the chequered flag. He had attempted to move up the order in the early stages, alternating positions with Valentino Rossi, but eventually settled for points which take him to 181 overall. Marquez is currently 43 points ahead of nearest rival Jorge Lorenzo.

The eleventh round of the season takes place next weekend in the Czech Republic.

Marc Marquez: “After how yesterday went, I’m happy with today’s race. My shoulder didn’t hurt at any time during the race, so no excuses there. I would have taken fifth position if it were offered to me before starting the race. I knew the Ducatis and Yamahas were fast, so this was the best possible outcome and it’s positive that we’ve only lost five points compared to Lorenzo. Given the difficulties we’ve had, it was clear that our objective was to think of the fight for the Championship. I started aggressively, as it was the only way of trying to fight with the front group, but after making a couple of mistakes I lost the slipstream and it was very difficult to recover from that”.