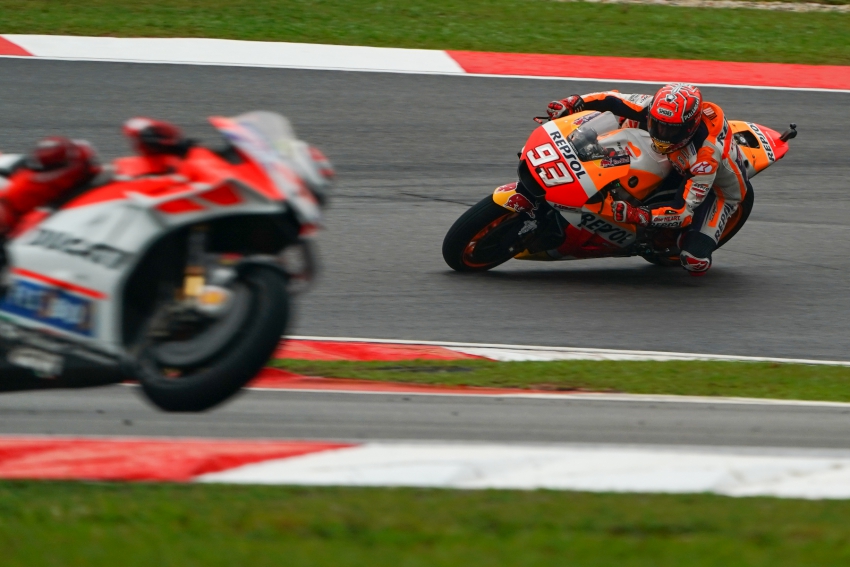 MARC MÁRQUEZ TAKES ANOTHER STEP TOWARDS THE TITLE

The Repsol Honda rider takes fourth in Sepang, and leads the standings by 21 points going into the final round at Valencia.

Marc Márquez only needs to finish eleventh at Valencia, should Andrea Dovizioso win the race, to take the MotoGP title.

Márquez set the fourth best race lap time and Pedrosa the seventh best. Neither of the two went quicker than 2:14, whilst racewinner Dovizioso clocked the fastest time of 2:13.084.

Marc Márquez: “Today the race was the most difficult one we could have had for the Championship because we had rain conditions and the track was extremely slippery. Anyway, I got a good start, and I tried to push at the beginning because I didn’t want to be stuck in the middle of the group. Then I tried to find the feeling and the pace but I saw that both the Ducatis were very fast, so I decided to not take too many risks, to be calm, and to get good points for the Championship. I thought about trying to get Zarco but the risk was too big just to have an advantage of 24 points instead of 21. This wasn’t the race to win the Title but rather one to get closer to it. I’m happy because after a difficult weekend, at a track were we always struggle, we still managed to finish fourth. Of course now we need to keep focused, to train well this week, and to work to be at 100% on Sunday in Valencia without relaxing too much with the advantage we have. Today we won the Constructor Title, and that’s a first step!”.