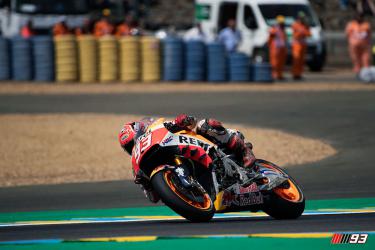 The rider from Cervera did not enjoy such a positive race, crashing on Lap 16 when riding in fourth place and closing in on the Top 3. The Repsol Honda rider picked his bike back up and showed pride to rejoin the race, crossing the line in thirteenth. The result gives him three points for this overall tally, which could be vital at the end of the season.

Following the fifth round of the 2016 season, Marquez occupies second place in the MotoGP World Championship with 85 points -5 off leader Jorge Lorenzo-.

Marc Márquez: “It was a pity about the crash today. I was having a good race, but these things can happen when you’re at the limit on every lap. I could have opted for a more conservative race, but here you can end up far back if you do that, so today I had to take risks. In the race I saw that I was losing ground under acceleration, and I had to make that back with my braking. Finally I lost the front and crashed. The positive is that I managed to get three points and I’m only five off Jorge Lorenzo in the standings, which isn’t a lot. Now we have a run of tracks that we found a little tough last year, but they’re quite different to Jerez and Le Mans, so I hope to be fast and have some good races.”