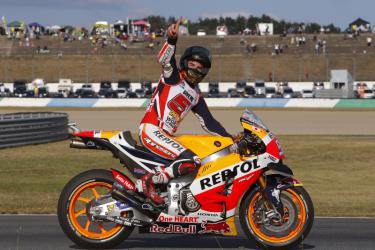 Marc Marquez has had little time to celebrate the fifth World Championship, won last Sunday in Japan, as this weekend he takes on Round 16 of the MotoGP season. The series heads to Phillip Island for the Australian GP, where the Spaniard took a thrilling victory last year. He comes into the 2016 race with the pressure off, having lifted the title with three races remaining.

Marc Marquez: “It’s fantastic to arrive at Phillip Island with no pressure for the Championship, as the track is one of my favourite in the calendar, along with Austin and Aragon. It’s so fast and flowing and you really have a lot of fun riding there. One of the main issues to take into account there is the weather. It’s usually very cold during this period of the year and always windy, something that you feel a lot, especially at the end of the final straight. You have to find a setup to make the bike as stable as possible. We’ll try to win some more races before the end of the year as there are also the Constructors and the Team titles to think of.“