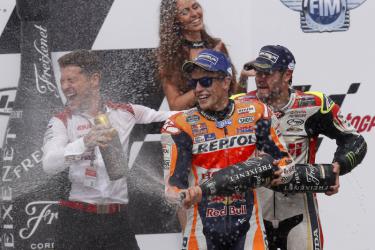 The Czech Republic Grand Prix provided another show in the MotoGP class, contest on a wet track that never quite dried out enough to require slick tyres. Marc Marquez managed to overcome the tricky conditions to achieve a valuable third place at Brno. The Repsol Honda Team rider thus scored 16 points in a tough race, and moves his points total up to 197. Still the series leader, he has a 53 point advantage over his nearest rival.

Marc Marquez: “I’m happy with the end result because the most important thing is that today I extended my advantage over second in the overall standings, as I only dropped four points to Valentino [Rossi] while Jorge [Lorenzo] didn’t score points. We proved that we’re competitive both in dry and wet conditions. This year we’re working like ants, making gradual, steady improvements and having a very complete season without changing our mindset.

I made a mistake with the tyres choice, but it’s easier to judge things in hindsight. Perhaps the best tyre choice was the hard compound on both the front and rear, but I was expecting a flag-to-flag race since the track normally dries quickly, which wasn’t the case today. When I saw that there was less than 10 laps to go and the track was still wet, I started to manage my tyre wear. I saw that Crutchlow and Rossi had a faster pace, so I concentrated on my other rivals and I can say I won the battle with them“.