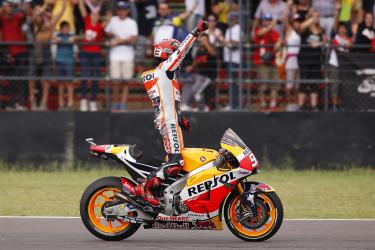 MARC MARQUEZ HEADS TO ‘HIS’ CIRCUIT AS SERIES LEADER

On the first visit to the Circuit of the Americas in 2013, Marc Marquez achieved his first win in MotoGP. He repeated the feat in both 2014 and 2015.

Marc Marquez’s victory at the Argentinian Grand Prix take the pair into the third round of the season in good form. Next up on the calendar is the Grand Prix of the Americas. The event becomes the only MotoGP race held in the USA this season, but it is in Austin, Texas, that Marc Marquez has enjoyed special success in previous years. In 2013, Marquez took his first victory in the premier class at the track. He repeated victory in 2014 and a year ago, Marquez managed another win. After intensive preseason work and looking to continue development of their Honda bike for this season, Marquez comes to Austin first in the overall standings.

Marc Marquez: “We’ll see how we manage in Austin this year. It’s a track that I like, where I feel strong, and where I’ve always had good races and good fun. That said, the track rewards strong acceleration, which hasn’t been one of our strongest points so far this year, so we’ll have to wait and see how we can manage the situation. We’ll keep working hard, as we did in Argentina, and we’ll try to find the best pace for the Sunday race.“