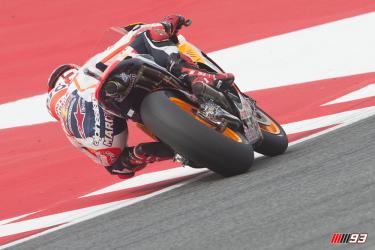 FRUSTRATION FOR MARQUEZ AFTER CRASHING OUT ON THIRD LAP

It was a day of mixed fortunes for the Repsol Honda Team, with Dani Pedrosa claiming his first podium of the season and reigning World Champion Marc Marquez crashing out of the Catalunya GP, from second place.

Marc had a great start from 4th and found himself in 2nd by the end of the first lap, with Dani losing out from 6th on the grid and dropping down to 10th. Marc was desperate not to let pole-man Jorge Lorenzo breakaway and set the fastest race lap on lap two whilst chasing him as Dani began to find his rhythm. However, on lap three Marc made an error in turn ten, running wide and found himself in the gravel trap unable to stop. He was brought down into the stones and the gear shifter was damaged, as a result ending his race.

Meanwhile Dani continued to progress through the pack and by lap five he was in 5th place. The following lap Dovizioso crashed out and promoted Dani to 4th and then on lap seven, Dani passed Aleix Espargargo into 3rd place, which is where he remained for the rest of the race. Dani has now finished on the podium in Catalunya seven times in the last eight years.

After seven rounds of the 2015 season, Marc remains 5th in the Championship on 69 points (69 points behind leader Rossi), with Dani in 10th on 39 points.

The team will be back on track tomorrow for a post-race test, before heading to Assen in two weeks time