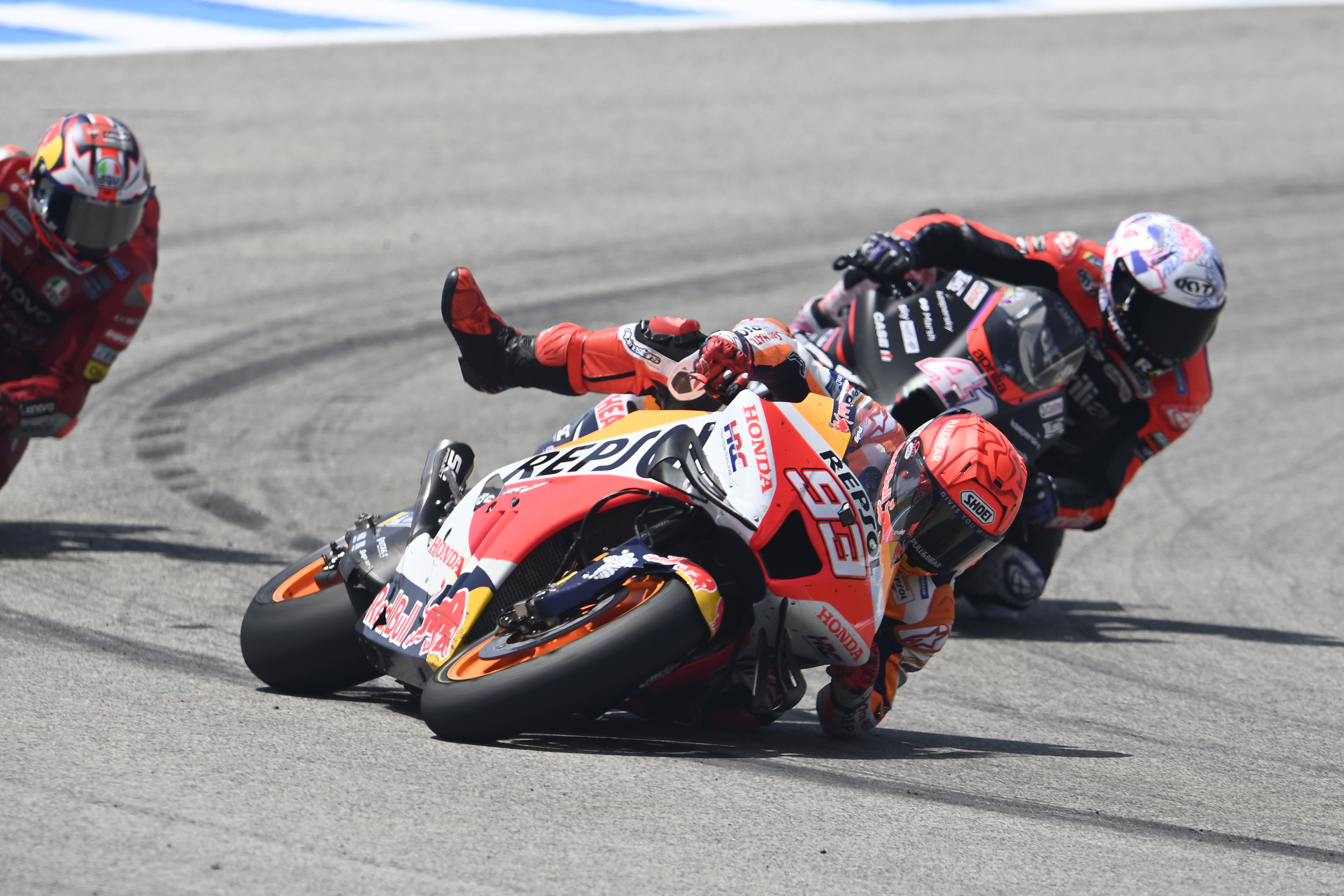 It might not have been the podium he was aiming for, but Marc Marquez showed he’s ready to fight with a spirited ride to fourth.

Crowds at the Gran Premio Red Bull de España were back to their best as the flocked to the hills of the Circuito de Jerez – Angel Nieto from dawn. Pushing 60,000, the home fans were wanting a show and the 25-lap MotoGP race certainly didn’t disappoint.

Initially launching off the line well, Marc Marquez found Aleix Espargaro in his path and had to alter his trajectory through the opening corner but quickly passed the Aprilia rider. A three-way game of chess would quickly emerge between Marquez, Aleix Espargaro and Miller as the trio tested each other for the majority of the race with a podium finish in view. The powder keg would ignite in the closing laps, Marquez attacking Miller and moving into third place with just five laps to go and with Miller so strong on the brakes, Marquez knew that attacking through the fast Turn 5 would be his best option as their chess game escalated.

From there it was a brawl as Marquez, Miller and Espargaro battled – an incredible save from the #93 at the final corner allowing Espargaro to just break away. A fired-up Marquez refused to let the moment hold him back as he fought until the very end with Miller, pushing his Honda RC213V to the limit and sending the crowd into a frenzy as he left long black lines around the track as Marquez looked to get past Miller again. 13 points in his pocket, Marquez moves up two positions into ninth overall in the championship and sits 45 points behind defending World Champion Fabio Quartararo.

The Repsol Honda Team will now remain in Jerez for the first in-season test of the year, a brief but important Monday test at the 4.4-kilometre-long track. The objective for both Marquez and Espargaro is to find the speed and feeling they had during the winter tests and return to consistently battling at the front of the field.

Marc Márquez, 4º: “Today I gave my maximum and achieved the maximum. I saved my energy through the whole weekend to be ready for Sunday because I’m still not in the condition to do a whole weekend at 100%. It’s the Spanish GP, I had to give it everything on race day. At one point in the race, I thought maybe the podium was possible, the key point was overtaking Miller and stopping Aleix because he was faster than us. This is what I tried to do but then at the last corner I lost the front and the rear but fortunately the Spanish crowd were there to pick me up and save the crash! We don’t give up; we keep pushing and now we prepare for an important Monday test.”