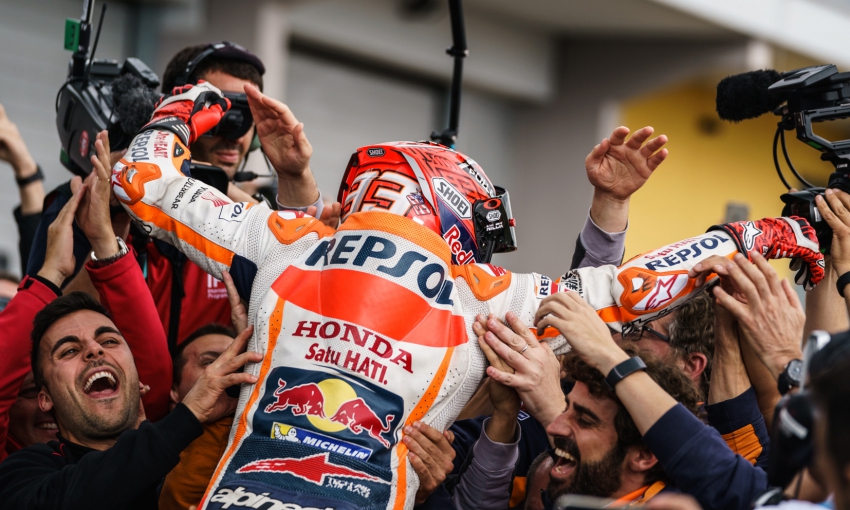 Marc Márquez took his second win of 2017 and his eighth in a row at the Sachsenring after starting from pole position to climb to the World Championship leadership.

Marc got away from the front row brilliantly at the start, entering the first corner in first place. On lap five, Jonas Folger overtook Marc on the following lap.  Marc moved back on top on lap 11 and went on to take a momentous victory that earned him the lead in the Championship before the four-week summer break. Marc dedicated his 31st MotoGP win (the same tally as Eddie Lawson) to Nicky Hayden, who passed away in May.

The Spanish rider will be back on the track for a two-day test in Brno on July 17 and 18.

Marc Márquez: “I’m very, very happy. I knew before the weekend that this was an important moment in the Championship and that the Sachsenring was an important circuit for us. It was the place to take a risk if necessary and to try to win. So I’m happy we took these 25 points and the lead in the Championship before the summer break. I wish to dedicate this win to Nicky (Hayden) and his family. I had promised this to myself after his incident because we had some very good moments together and he was a friend. The race was very tight. Honestly, before the start I thought I would have to battle with Dani, but actually there was also another very fast opponent. I was very surprised at the beginning to see Jonas there, and I thought he might stay in between with the other riders, but he actually remained there! He was quite a tough opponent! The Championship is very close with four riders within 10 points and with Dani also not far away. Everything is open, so we’ll keep the same mentality, the same positivity and hard work. Now we have a few days of holidays, but not too much to be ready for Brno test!”.