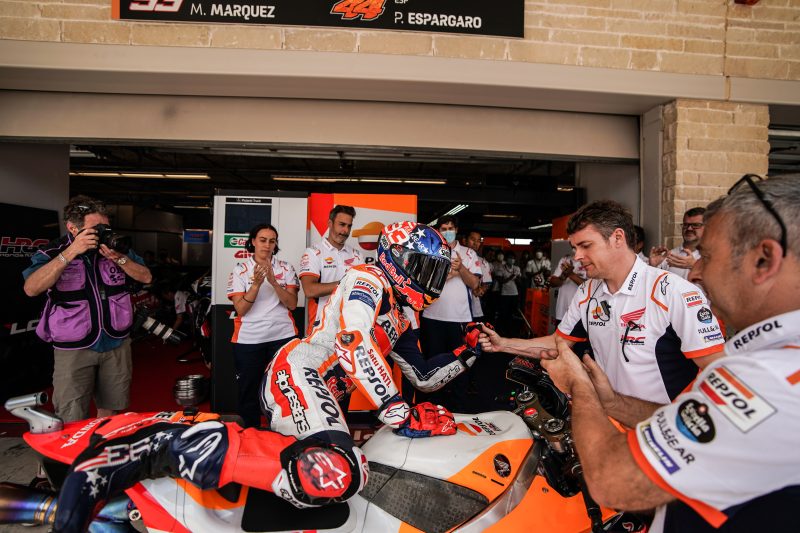 Marquez steals the show in Austin with scintillating recovery

An Americas GP masterclass was put on by Marc Marquez as he carved through the field, overcoming a problem at the start to show what he and the Honda RC213V are capable of

The King of COTA may not have walked away with another crown, but a heroic recovery after problems on the start line showed that Marc Marquez has lost none of his speed or talent – especially in Texas. A technical problem at the start, which Honda HRC are investigating, saw Marquez drop back from ninth on the grid. Arriving last into Turn One, the seven-time Americas GP winner put the start behind and began his comeback through the field with unrelenting efficiency. By the end of the first lap the #93 had already made up six places and would continue with the laptimes of the race leaders.

As the race entered its second half, Marquez continued to increase his pace, improving on the fastest lap of the race on multiple occasions as he reeled in the likes of Quartararo, Martin and Bagnaia. Firmly inside the top ten, the Repsol Honda Team rider spent the closing laps fending off a ferocious Fabio Quartararo who launched a late counterattack.

Welcomed back to the garage with a round of applause by the team, Marquez’s champion spirit shone through as he was left wanting more from a race which promised so much. Sixth place moves Marquez to 13th in the championship points table, 40 points behind World Championship leader and Americas GP race winner Enea Bastianini. Although sixth left him unfufilled, Marquez leaves America with renewed and refreshed confidence upon his return from injury.

The MotoGP World Championship now prepares for its return to Europe, the Portimao circuit in Portugal starting the calendar’s European tour.

Marc Márquez, 6º : “On one hand I am disappointed because it is clear we had the speed today and I was able to enjoy the race a lot, coming through from the back, but 25 points were possible today. We had a technical problem at the start, but it resolved itself and the bike was working well after that – even if I was last. I recovered many positions and had a great race despite some mistakes, which is normal when you are recovering like this. We can see the speed is there and we can walk away from here with a lot of confidence which is important. At the end we had a really nice battle with Fabio but when the race finished, I was destroyed, from that first lap I was giving everything I had on track to recover and finally finish in sixth. Another exciting race in Texas.”