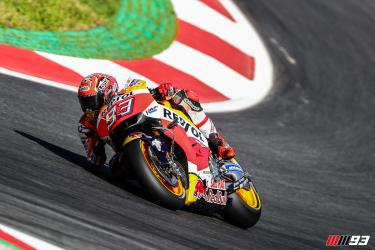 MARC MARQUEZ WANTS TO STEP AGAIN INTO THE PODIUM AT BRNO

Marc Marquez will be in action for a second consecutive week, heading to the historic Brno circuit after a challenging Austrian GP.

The Repsol Honda rider holds two victories at Brno: One in Moto2 in 2012 and one in MotoGP in 2013. After 10 races, Marc Marquez leads the World Championship with 181 points, 43 more than closest rival Jorge Lorenzo and 57 more than third placed Valentino Rossi. Pedrosa lies fourth with 105 points.

Immediately following the Austrian Grand Prix, the MotoGP World Championship takes the short trip to the Czech Republic for round 11 of the 2016 season. Marc Marquez comes into the Czech GP leader of the overall standings with 181 points, and has a good record at Brno. The Spaniard has been on the podium at 4 of his last 5 appearances there (2 in Moto2 and 2 in MotoGP), with two victories.

Marc Marquez: “We had a challenging weekend in Austria but we did the best we could and, all things considered, we were able to get away quite well. The shoulder didn’t bother me during the race but it was a bit sore afterward, so these couple of days before Brno have been good to rest a bit. Brno isn’t one of my favourite tracks but we’ve been able to get some good results there in the past. We must be really focused and work well in order to be able to fight for the podium again“.