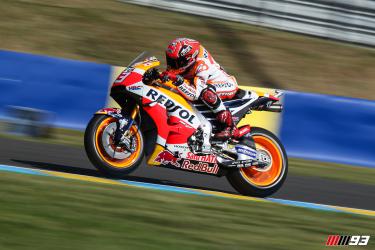 MARC MARQUEZ WANTS TO CLIM THE PODIUM AT MUGELLO

Marc Marquez faces one of the most challenging tracks on the MotoGP calendar, with very different characteristics to Jerez and Le Mans.

The MotoGP World Championship rolls on to Italy this weekend, as the Repsol Honda rider face Round 6 of the 2016 season. Marquez take on the unique Mugello circuit in his latest challenge, and the Cervera rider has fond memories of the track. Marc Marquez took his first Grand Prix win at the track in 2010 –racing in the 125cc class.

Following five races in the 2016 season, Marquez lies second in the overall standings with a total of 85 points –just 5 points off series leader Jorge Lorenzo.

Marc Marquez: “I look forward to the next two races: we need to focus and concentrate on Mugello and Montmelo which are two very different tracks from both Jerez and Le Mans. They require more corner speed and if two years ago I would have said that they were demanding tracks for us now I think that maybe they can be better. We have work to do but I believe that if we improve the acceleration, our bike is one of the best out there. Not easy to get it due to the actual rules that prevent us from working on the engine, but I know that Honda is working hard on every other area of the bike and I believe in them, so we remain positive and in Mugello we will go with the podium as a target but we will see how the situation will shape up and in case we will try to get the most the conditions will allow us to.“