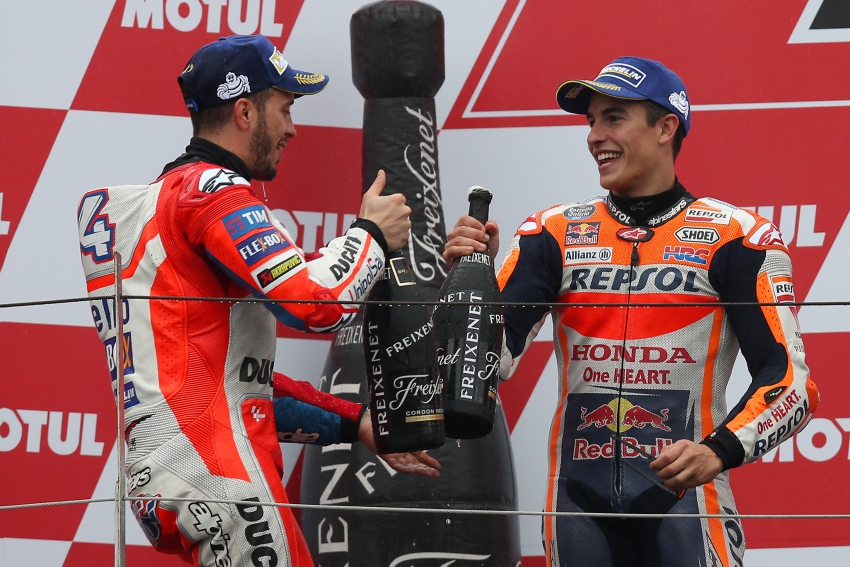 Repsol Honda rider fights for the win until the last corner of the race, and remains World Championship leader with 11 point advantage.

Marc Márquez claimed his 100th Grand Prix podium in a race held on a completely wet race, and decided on the last lap.

Starting from third position of the grid, Márquez was first on Lap 13. Six laps from the end he was overtaken by Andrea Dovizioso and they have exchanged passes several times on the last three laps.

Marc Márquez: “Of course I tried and gave it my 100%, fighting until the last lap and the last corner. It was an amazing race with the two guys fighting for the Championship fighting for the win. Today there was a lot of water on track and for some reason I was struggling a little more than expected. I tried to push and be smooth but Andrea was very fast too for the entire race. Entering the last lap, I knew I had only a very small advantage ahead but then I made a small mistake in turn eight, well, quite a big mistake actually, and he caught me. After he passed he was very strong on the brakes and I wasn’t able to match him. In the last corner I tried again but it was not possible to pass him again. Today he did an incredible race and won but anyway I’m happy with our result as I was expecting him to be very very fast here. We scored some good points and made a good show for the fans so it’s ok.”