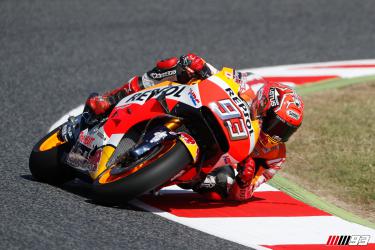 MARC MARQUEZ, TO CONSOLIDATE THE LEADERSHIP IN ‘THE CATHEDRAL’

Marc Marquez gets to the Dutch Grand Prix with the goal of maintaining the positive momentum after the great race he completed in the Circuit de Barcelona-Catalunya.

After achieving the podium in Catalunya a fortnight ago, Marc Marquez gets to Assen, Netherlands, a circuit with such a long motorcycling tradition that it has earned the nickname “The Cathedral.” The Cervera rider is leading the World Championship standing with 125 points and this is a good circuit for him where he has achieved four victories across all classes and two MotoGP podiums.

Marc Marquez: “We’ve had two weekends off after Catalunya, and it has been good to be able to disconnect a bit, spending a little time with my friends and enjoying the amazing experience of doing some laps on the RC213V-S at the Red Bull Ring last Tuesday. Anyway, I’m happy that the time to go racing at Assen has arrived, as it’s a track I really enjoy and, importantly, the first in a series of circuits that suit my riding style quite well! Step by step, we’re making some small improvements to the bike, so in Assen we’ll keep working hard from the first session to find a good setup and try and fight for the podium again. The weather is particularly unpredictable there, so we’ll keep an eye on that also and try to be fast from the beginning of the weekend”.